INEOS Styrolution America LLC hosted its’ 14th annual White Ball Massacre on October 7, 2016, at Timbercreek Golf Club.  The White Ball Massacre is an annual golf tournament held by the Gulf Coast sites in conjunction with their suppliers and contractors, with all proceeds being donated to Boys & Girls Harbor of LaPorte, Texas.

The Harbor, founded in 1947, serves as a refuge for children ages 5 to 18 in crisis due to neglect, abandonment, abuse or family hardship.  The Harbor welcomes children in need regardless of race, creed, color or financial status, offering them a safe, loving, family environment.

This year’s tournament netted $75,799.59, and since 2004, INEOS Styrolution has donated more than $400,000 to the Harbor. Cathy Culpepper, VP Styrenics Manufacturing, comments: “We are honoured to have the opportunity to continue supporting Boys and Girls Harbor. The annual White Ball Massacre has become an event that both our employees and vendors/suppliers look forward to every year. It is a great way to have a lot of fun and to support a worthy cause.”

“We in the Gulf Coast support The Harbor because they are located in our community and we see the work they do. Anyone at any time can drop by The Harbor houses, talk to the kids, and see where the money is going,” adds Margaret Martin, Procurement Leader and coordinator of the White Ball Massacre since 2002.

INEOS Styrolution is the leading, global styrenics supplier with a focus on styrene monomer, polystyrene, ABS Standard and styrenic specialties. With world-class production facilities and more than 85 years of experience, INEOS Styrolution helps its customers succeed by offering the best possible solution, designed to give them a competitive edge in their markets. The company provides styrenic applications for many everyday products across a broad range of industries, including automotive, electronics, household, construction, healthcare, toys/sports/leisure, and packaging. In 2015, sales were at 5 billion euros. INEOS Styrolution employs approximately 3,100 people and operates 15 production sites in nine countries. 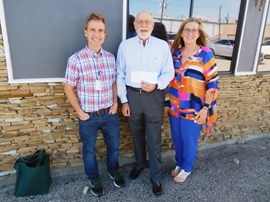