INEOS Styrolution, the global leader in styrenics, published its second sustainability report today, which complies with the standards of the Global Reporting Initiative (GRI), the acknowledged benchmark reporting standard in this field. It is based on the principles of the GRI’s fourth-generation (G4) sustainability reporting guidelines at the ‘core level’.

The report succeeds the 2015 GRI report, which resulted in a silver rating by EcoVadis, an independent assessor of corporate sustainability performance. This places the company in the top 10% in the category of plastics manufacturers.

While the report from 2015 was a “360° quantitative analysis” of the business, the new report sets solid sustainability targets for the company’s seven focus areas (safety, health & environment (SHE), compliance, human resources, procurement, operations, R&D and community involvement) and measures achievements against these targets for the first time.

Since the inception of the company in 2011, INEOS Styrolution has driven various sustainability-related initiatives and integrated those into a unified global sustainability program entitled “Living Sustainability. Together.”

The current report is the latest evolution of publications:

-       2016: First quantitative report based on GRI G4 reporting guidelines introducing sustainability targets per area of the business, published in July 2017

INEOS Styrolution is the leading, global styrenics supplier with a focus on styrene monomer, polystyrene, ABS Standard and styrenic specialties. With world-class production facilities and more than 85 years of experience, INEOS Styrolution helps its customers succeed by offering the best possible solution, designed to give them a competitive edge in their markets. The company provides styrenic applications for many everyday products across a broad range of industries, including Automotive, Electronics, Household, Construction, Healthcare, Packaging and Toys/ Sports/ Leisure. In 2016, sales were at 4.5 billion euros. INEOS Styrolution employs approximately 3,200 people and operates 16 production sites in nine countries. 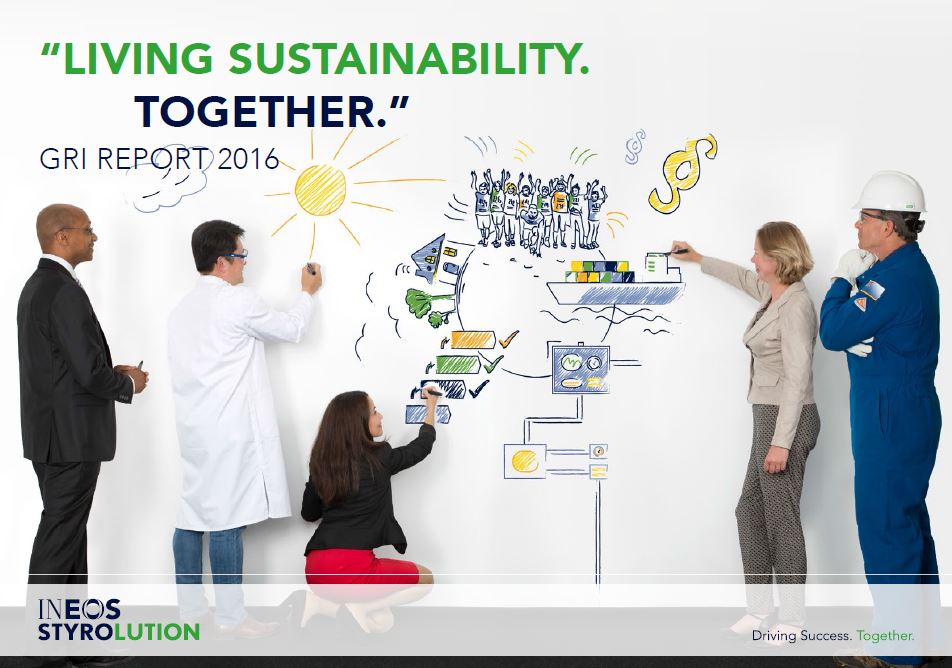