INEOS Group Holdings S.A. (‘IGH’ or ‘INEOS’) announces its trading performance for the fourth quarter of 2013.

The results of the Group have continued to be adversely impacted in our O&P Europe and Chemical Intermediates businesses by the fire on a compressor at the cracker in Lavera in December 2012.  The cracker resumed partial operations in March 2013 and continued at this level throughout the fourth quarter.  The partial closure has impacted the results by a net €85 million for the full year 2013, reflecting lost margins less insurance proceeds agreed to date.  The cracker returned to full operations in January 2014.

North American markets have continued to show a strong demand trend, taking full benefit from their current feedstock advantage.  In contrast the industry sentiment in Europe and Asia has remained relatively weak.

O&P North America reported EBITDA of €203 million compared to €197 million in Q4, 2012.  Full year 2013 EBITDA was €913 million compared to €706 million for 2012.  The business benefited again from its flexibility to be able to utilise cheaper NGL feedstocks to maintain healthy margins.  The US cracker business environment was strong, with top of cycle margins and high operating rates throughout the quarter.  Polymer demand was very robust, supported by an improving US economy.

Chemical Intermediates reported EBITDA of €110 million compared to €159 million in Q4, 2012. Full year 2013 EBITDA was €511 million compared to €689 million for 2012. Chemical Intermediates experienced a mixed performance in the quarter.  The overall demand trend in the Oligomers business was strong, particularly in North America, supported by robust polyethylene co-monomer and drilling segments. The Oxide business had a stable performance for the quarter with solid EO demand offset by slow demand for solvents.  Demand for the Phenol business was soft in most sectors and margins have remained relatively low.  Volumes for the Nitriles business were weak with bottom of the cycle margins.  The partial closure of the cracker in Lavera during the year adversely impacted the results of the Oxide and Oligomers businesses by €25 million for 2013.

O&P Europe reported EBITDA of €8 million compared to €(45) million in Q4, 2012. Full year 2013 EBITDA was €87 million compared to €122 million for 2012.  The results for the year across the three regions were: North €139 million (FY2012: €183 million), South €(37) million (FY2012: €(29) million) and the UK, prior to disposal, €(15) million (FY2012: €(32) million).  The Group disposed of the O&P UK business on October 1, 2013.  Demand for olefins in the quarter was subdued with industry cracker operating rates remaining trimmed.  Margins were relatively steady in the quarter, although butadiene margins were low in line with depressed European tyre demand.  The results were also impacted by a scheduled turnaround on the cracker in Koln during the quarter.  Polymer demand was reasonable and margins remained low during the quarter.  The partial closure of the cracker in Lavera during the year adversely impacted the results of O&P South by €60 million for 2013.

The trading environment at the start of 2014 has improved in comparison to Q4, 2013. In O&P Europe, the Lavera cracker has been restarted after the fire and all other crackers are running well.  There have also been signs of improving demand in the Phenol and Nitriles businesses.  Trading conditions for O&P North America remain strong. 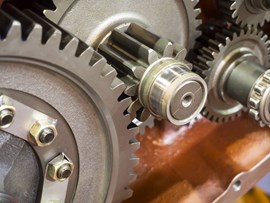