INEOS has today announced the  expansion of its cracker feedstock procurement and  trading activity within Europe.  The new trading business will be headquartered in Rolle, Switzerland and, from next month, will also have operations based out of INEOS' office in London.

Having previously outsourced the majority of the procurement of its European naphtha requirements, INEOS is now bringing this “in-house” to leverage its large and established position within these commodity markets.  This activity will be conducted through the Trading & Shipping business which is part of  INEOS Europe AG.

David Thompson,  CEO of INEOS Trading & Shipping said “We are delighted to be enhancing our presence within the feedstock trading sectors which will contribute significantly to the sustained delivery of commercial value across our large portfolio of assets.”

As an integral part of this project , INEOS is pleased to announce the conclusion of an agreement with Oiltanking Ghent for the storage and throughput of naphtha.

Although this business will encompass all of INEOS’ naphtha activity including the output of the refineries at Grangemouth and Lavera, the main beneficiary of the agreement with Oiltanking Ghent is the INEOS site in Köln.  Naphtha is the main feedstock used at the site which supplies two ethylene production units (crackers) of 1.3 million tons per annum total capacity and is delivered to the site by pipeline or barges on the River Rhine.

INEOS is a significant consumer of ethane, propane, butane, naphtha and condensates.  The integrated trading business enables not only provision of these feedstocks where they are needed but also financial risk management in a constantly changing market. 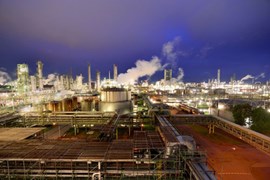 The main beneficiary of the agreement will be the INEOS site in Koln.