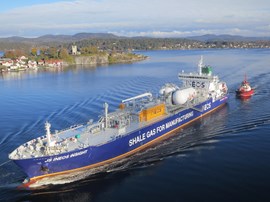 The investment is made possible because of INEOS massive $2 billion investment in our Dragon Ships programme.