ITV is joining forces with INEOS to launch a national campaign to encourage all primary schools across the UK to take up The Daily Mile.

On 7th April, ITV will broadcast the first of a series of commercials, highlighting the importance of The Daily Mile and drawing attention to the extraordinarily positive impact it has on children’s fitness, health, and concentration levels.

The advertising campaign will be supported by editorial in ITV programmes as well as a series of nationwide events and a dedicated call centre for teachers and parents to find out more about the initiative.

Carolyn McCall, ITV’s Chief Executive, says, The Daily Mile has already proved a great success for the schools that are taking part with a hugely positive impact on children’s health and wellbeing. ITV wants to use the power of TV and the reach of our programming to change attitudes and behaviours towards living more healthily. We are aiming to get the whole country engaged with this initiative and every UK primary school taking part.”

The Daily Mile is simple and free and gets children out of the classroom for fifteen minutes every day to run or jog with their classmates, making them fitter, healthier, and more able to concentrate in the classroom.

Jim Ratcliffe, founder and chairman of INEOS and a keen runner himself, says “INEOS has been supporting The Daily Mile for the last three years. We know how important it is to encourage children to get fit and healthy and look after themselves, not just for today but for the years to come. We are delighted to be working with ITV to help take The Daily Mile to the next level” 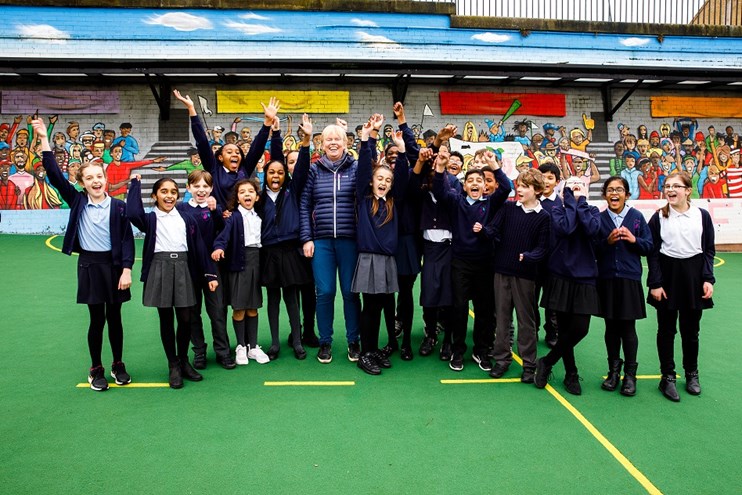 Elaine Wyllie, the founder of The Daily Mile, former head teacher and a Pride of Britain Award winner will feature in the first commercial to introduce the campaign, “But the focus is on the children and the schools – The Daily Mile is theirs, and quickly and simply integrates into everyday school life”, she says.

Elaine says, “We have already had a lot of success with The Daily Mile, but this campaign will be a major step forward. With ITV’s and INEOS’s help, it’s my hope to get every primary school in the UK joining in The Daily Mile movement”.

Elaine started the initiative in 2012, whilst headteacher at St Ninians Primary School in Scotland. Since its launch, The Daily Mile has spread to over 900 schools in England, over 700 in Scotland, over 190 in Wales and over 55 in Northern Ireland.

The Daily Mile already has the formal backing of the Scottish and Welsh governments, and Elaine is now hoping that she can secure the support of the UK government to help her to roll out the campaign to every primary school in Britain.

Elaine Wyllie adds: “The Daily Mile has already changed the lives of many children for the better. It is free, fun and effective. It only takes fifteen minutes and has been shown to improve their health, fitness, and concentration in class. It is my hope that these benefits will be felt by children in schools across the UK.”

The first Daily Mile advert will run during one of ITV’s biggest programmes, Saturday Night Takeaway, and then be rolled out across all the ITV channels.

In addition to The Daily Mile’s first ever TV campaign, ITV will also support the initiative with editorial coverage across its flagship daytime programmes as well as social channels and online, directing viewers to www.thedailymile.co.uk.

To find out more about The Daily Mile visit www.thedailymile.co.uk, where teachers can sign up to join The Daily Mile movement and download resources to help them get started. Parents and teachers are encouraged to follow The Daily Mile on social media to keep up with all the latest news and share their Daily Mile experiences with the team. In addition, there is an information line that can be reached by calling 0330 8800 100 (Weekdays 7am-8pm and Weekends 9am- 5pm)

About ITV
ITV is an integrated producer broadcaster and the largest commercial television network in the UK. It is the home of popular television from the biggest entertainment events, to original drama, major sport, landmark factual series and independent news. It operates a family of channels including ITV, ITVBe, ITV2, ITV3 and ITV4 and CITV, which are broadcast free-to-air. ITV is also focused on delivering its programming via the ITV Hub, mobile devices, video on demand and third-party platforms. ITV Studios is a global production business, creating and selling programmes and formats from offices in the UK, US, Australia, France, Germany, the Nordics and the Netherlands. It is the largest and most successful commercial production company in the UK, the largest independent non-scripted indie in the US and ITV Studios Global Entertainment is a leading international distribution businesses.

About The Daily Mile
The Daily Mile was first developed by Elaine Wyllie when she was Headteacher of St Ninians Primary School in Stirling in February 2012. It is profoundly simple – but can be transformational to children’s health and wellbeing. It involves classes heading outside to jog or run around the school grounds every day, rain or shine, at whatever pace suits the child best. It gets children active with their friends and teachers, and refreshed for further learning. The Daily Mile is free, fun and fits in the school day easily. It only takes 15 minutes desk-to-desk, causing minimal disruption to the school day, but has lasting effects: not only do children become fit within 4 weeks, they are also reported to concentrate better in class, eat and sleep better at home, and develop stronger bonds with their classmates and teachers, too. Though named “The Daily Mile” (children tend to average running a mile in this time), the distance isn’t compulsory, and the ethos of the scheme is of inclusivity, enjoyment, and self-improvement over time. The Daily Mile is intended to help all children, no matter their age or personal circumstances, enjoy getting active every day- getting fitter and healthier now, but also developing healthy habits for a lifetime.

About INEOS
GO Run For Fun and The Daily Mile are both supported by INEOS, a multinational company headquartered in London, with health and fitness at the heart of its ethos. INEOS Chairman Jim Ratcliffe, who is himself deeply passionate about running, said: “It has never been more important to support young people in leading healthier, more active lives. We are very proud to support and celebrate these two initiatives that have been making a positive impact on the health and wellbeing of hundreds of thousands of children in the UK and beyond, for the last four years.” 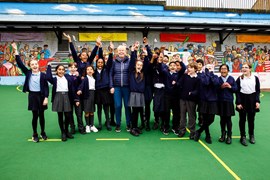 “We have already had a lot of success with The Daily Mile, but this campaign will be a major step forward. With ITV’s and INEOS’s help, it’s my hope to get every primary school in the UK joining in The Daily Mile movement.” Elaine Wyllie, the founder of The Daily Mile.