INEOS Grangemouth moves forward on the next phase of its journey to reduce greenhouse gas emissions to net zero by 2045, with further investment in excess of £1 billion.

INEOS Grangemouth has today announced planned further investment of over £1 billion towards reducing greenhouse gas emissions at its site to net zero by 2045, building on the 37% reduction in net CO2 emissions already delivered since acquiring the site in 2005.

INEOS has already committed over £500m spend on projects which are approved and currently being implemented at Grangemouth. This includes investment in our New Energy Plant, which is due for completion in late 2023 and will supply energy to all our site operations and the highly efficient technology will drive down emissions by at least 150,000 tonnes of CO2 per annum.

Today’s announcement includes in excess of a further £1 billion spend to enable this next phase of the transition to net zero.

Our Road Map will deliver a reduction in excess of 60% in greenhouse gas emissions by 2030 through a series of investments, partnerships, and innovative engineering.

Additional contributions to driving down emissions will come from further investments in energy reduction and optimisation, along with electrification of key equipment. There will also be a shift in our polymer product portfolio to include higher levels of post-consumer recycled content as we contribute to a growing circular economy.

INEOS Grangemouth’s Road Map highlights its commitment to supporting the goals of the Paris Accord and helping the Scottish Government in its drive for a ‘Just Transition’ to a net zero economy.

Net Zero Secretary Michael Matheson said: “I welcome this significant investment, which demonstrates INEOS’ support for Scotland’s journey to becoming a net-zero economy by 2045. This will not only drive forward innovation and diversification to tackle emissions at Grangemouth, but will also support the decarbonisation of other sectors, sites and regions across Scotland.

“Low-carbon hydrogen offers the swiftest decarbonisation route for our industrial sector and today’s commitment by INEOS makes an even stronger case for the UK Government to select the Scottish Cluster, which INEOS partnered with in the summer, to be among the first CCS clusters to be awarded funding through its current cluster sequencing process

“Grangemouth, and INEOS itself, already holds a wealth of experience in engineering solutions and hydrogen production, and this new investment holds great potential for the future of Grangemouth, as well as the vital jobs that are located there, as part of our just transition to net zero.”

Andrew Gardner, Chairman INEOS Grangemouth, said: “We actually have to go much further than the significant CO2 reductions we’ve achieved already. By 2045 we have to be net zero equivalent and we have to set some really ambitious but achievable targets for ourselves for 2030.”

Stuart Collings, CEO INEOS O&P UK, “Our challenge is to deliver a Road Map which ensures a Just Transition to Net Zero. This can only be achieved if we remain globally competitive and we stay ahead of evolving regulations and legislation. Hydrogen will play a very important role in the decarbonisation of our manufacturing plants. Building the infrastructure for large scale utilisation of hydrogen creates a foundation to achieve net zero by 2045 and enables wider use of hydrogen by INEOS and others in and around Grangemouth.”

INEOS at Grangemouth has the skilled resources and capabilities to make this transition work, along with key partnerships such as the Acorn project, Scotland’s carbon capture and storage project. We expect that we can count on both the Scottish and UK governments’ support to drive positive change towards Net Zero.

The INEOS Grangemouth Net Zero Road Map is ambitious, but achievable. It creates the foundations for the delivery of net zero by 2045 and will establish a low carbon, hydrogen infrastructure critical to secure the future of large-scale manufacturing at Grangemouth.

Petroineos operates the Grangemouth Refinery and is a Joint Venture formed between INEOS and PetroChina in 2011. As Scotland’s only crude oil refinery, Petroineos is the primary supplier of aviation fuel for Scotland’s main airports and the major supplier of petrol and diesel across Scotland’s Central Belt, as well as in Northern Ireland and Northern England.

INEOS O&P UK operates the Olefins and Polymers petrochemical plants at Grangemouth. The raw materials used by this business present an outlet for North Sea gases, delivered via the co-located Forties Pipeline System. Its finished products of ethylene, propylene, polyethylene, polypropylene, and ethanol are used as the building blocks in a multitude of sectors, making products that meet society’s needs – in pharmaceutical & healthcare, agriculture, construction & utilities, food & beverage, and automotive & transport sectors. Many other sectors and companies rely on our materials to reduce their CO2 emissions with low carbon solutions for renewable energy generation, lightweight packaging, automotive components, and the plastics used in our homes, offices, schools, and hospitals.

Our recently relaunched website, www.ineosgrangemouth.com, features regular news stories providing details about individual projects and activities that are helping us to drive down our net CO2 emissions. 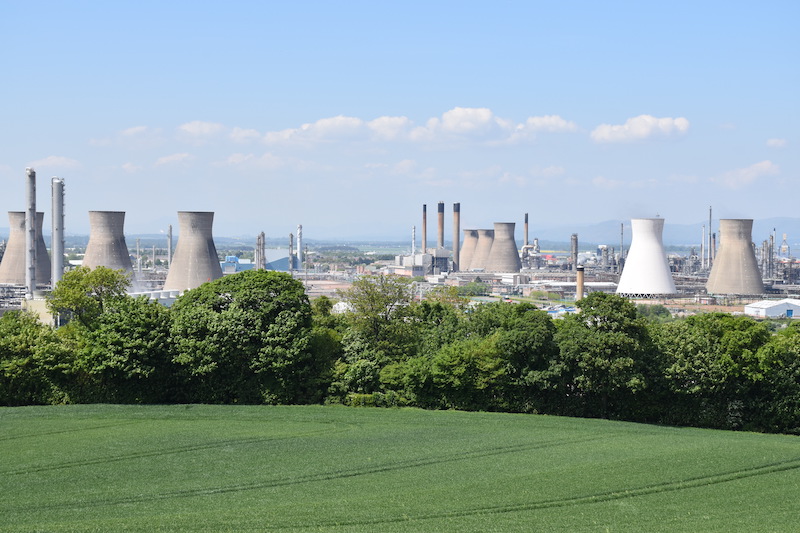