The Province of Antwerp has today granted an environmental permit to INEOS Olefins Belgium for Project One. This is an important step towards the construction and operation of the most environmentally sustainable cracker in Europe.
In developing this production site in Antwerp, INEOS will comply with some of the strictest environmental regulations in the world, whilst contributing to the renewal of the chemical cluster in Flanders and setting a new environmental standard in Europe.
John McNally, CEO INEOS Project ONE stated:
"We have submitted a solid and comprehensive permit request and are very pleased that these efforts have been honoured with a favourable decision. The urgency of tackling the climate problem is now clear to everyone. With Project ONE, we do not want to stand on the sidelines as an industrial player, but want to make a fundamental difference as of today. By consistently opting for the best available techniques in our design, we are setting a new environmental standard within our industry. Our ethane cracker will have the lowest carbon footprint in Europe: three times lower than the average European steam cracker and less than half of that of the 10% best performers in Europe."
Renewal in Europe
Project ONE will be the largest investment in the European chemical sector in a generation. It will be a game changer bringing new opportunities to the chemical cluster in Antwerp. Through technological renewal the company aims to strengthen the resilience of the European chemical sector in a global economy.
Over the past twenty years, investments of this magnitude (over 3 billion euros) have gone primarily to regions such as China, the United States and the Middle East. INEOS wants to break this trend and has opted for Antwerp, the region with which it has developed a special relationship since the Group's very first activities were launched in the Port of Antwerp. The investment in the new plant will create 450 direct jobs and thousands of indirect jobs.
When the Project ONE cracker comes on-stream, it will raise the benchmark for low carbon emissions within the European Trading Scheme (ETS) against which other European crackers will be judged. It will substantially tighten the standard for other European steam crackers.
ENDS.
Note to Editors:
From the start closest to net zero

Project ONE will make a fundamental difference from start up, by making maximum use of the very best of today's technology. This translates into the lowest carbon footprint of all crackers in Europe. As a result, the plant is well ahead in achieving a further reduction of emissions towards net zero as new technologies become viable.

The plant design includes the necessary flexibility to integrate other technologies as soon as they become mature, such as carbon capture and storage and increasing the use of hydrogen as a fuel once this becomes available. Electrification of the cracking furnaces will also be considered when the technology is sufficiently advanced.

Project One aims to become climate-neutral within 10 years of the cracker's start-up, using one of the above technologies. The target year for operation is 2026 as construction will take approximately 4 years.

Project ONE is an investment by INEOS in the Antwerp chemical sector for the construction of an ethane cracker. The multi-billion euro investment is the largest in European chemistry in more than 20 years. The advanced plant will produce ethylene, one of the most widely used base chemicals worldwide and an essential building block for a wide range of products, including medical applications, textiles, computer and smartphone casings, household appliances, food packaging and cosmetics. Ethylene is also used in lightweight parts for cars and wind turbines, insulation materials for the construction industry and pipes for transporting drinking water.

Project ONE will set the standard for the chemical industry in Europe by employing the best available techniques. In particular, it will break new ground in terms of energy efficiency and will have a carbon footprint that is less than half of the top 10% steam crackers in Europe.

The target year for operation is 2026 as construction will take approximately 4 years. The investment will create 450 direct jobs and thousands of indirect jobs. More information on : https://project-one.ineos.com 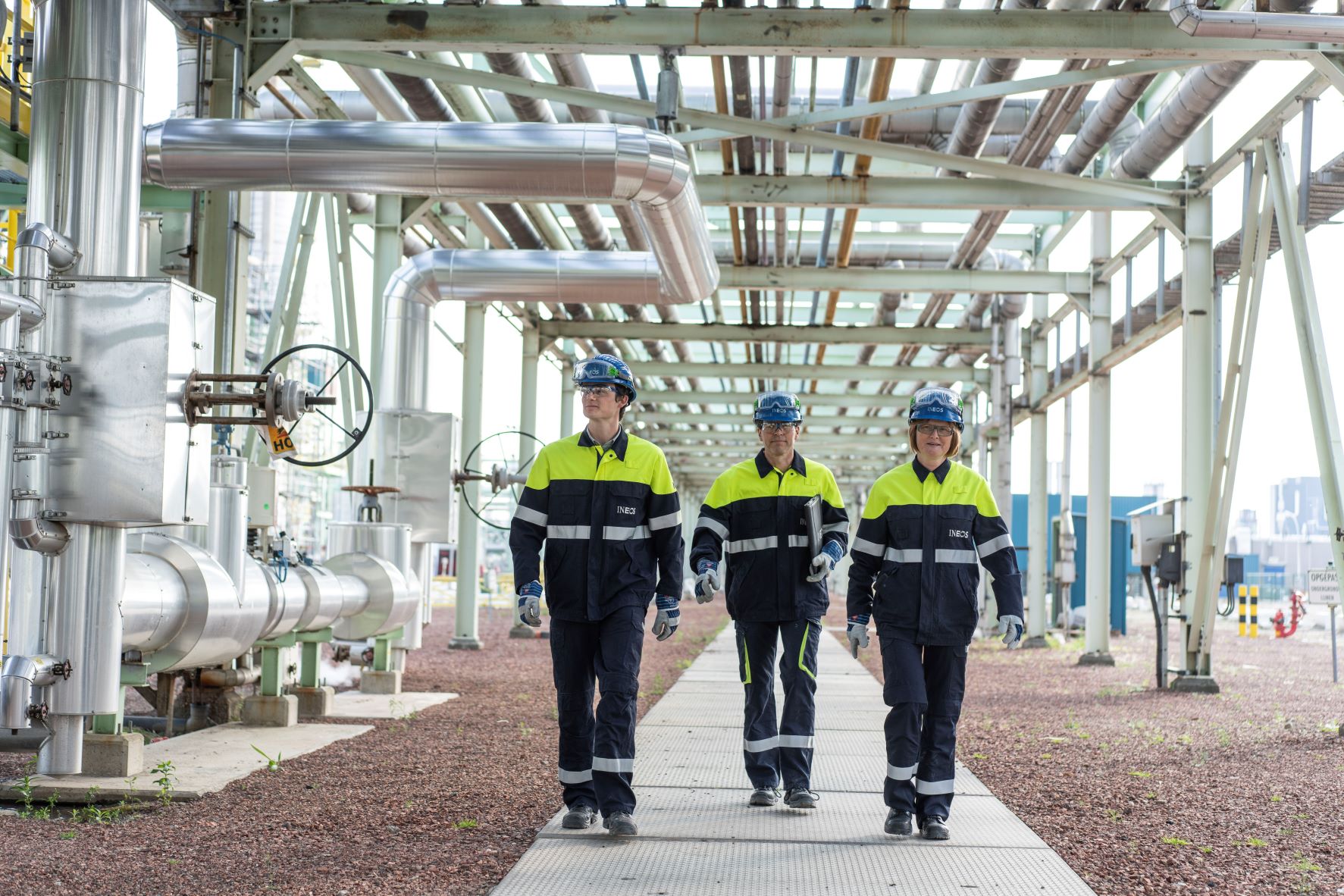 INEOS at Antwerp commits to staying ahead of EU climate and energy targets in...

INEOS signs renewable power deal with RWE to reduce CO2 emissions from its...

INEOS agrees to the largest ever industrial wind power purchase contract in...