Following a commitment of £72 million of funding, HyNet North West will transform the North West into the world’s first low carbon industrial cluster, playing a critical role in the UK’s transition to ‘net zero’ greenhouse gas emissions by 2050 and the global fight against climate change.

HyNet North West is essential for UK Government to deliver several objectives within its 10-point plan for a green industrial revolution, as well as the local net zero targets of Cheshire West & Chester in 2045, Liverpool City Region in 2040 and Greater Manchester in 2038.

The North West industrial cluster region stretches from Flintshire and Wrexham, through Cheshire, Liverpool City Region and Greater Manchester into Lancashire.  It boasts the largest concentration of advanced manufacturing and chemical production in the UK and is home to a concentration of energy intensive users.  The HyNet North West hydrogen and carbon capture and storage (CCS) project is being developed by a world-class consortium of regionally located partners, Progressive Energy, Cadent, CF Fertilisers, Eni UK, Essar, Hanson, INOVYN (part of the INEOS Group) and the University of Chester.

HyNet North West will reduce regional carbon dioxide emissions by up to 10 million tonnes every year by 2030 – the equivalent of taking four million cars off the road.  By then, HyNet North West alone will already be delivering 80% of the Government’s new UK-wide target of 5GW of low carbon hydrogen1 for power, transport, industry and homes.

The project will kick start a low carbon hydrogen economy, protecting and creating jobs, setting the region on course to be the world leader in clean energy innovation.  In addition to creating over 6,000 new, permanent jobs, HyNet North West will protect and retain jobs in existing high value manufacturing industries.  Workers will develop fresh skill sets and train in exciting new sectors, fostering regional growth and inward investment.  By kick-starting the UK’s hydrogen economy, HyNet North West will help support up to 75,000 jobs across the country by 2035.

The £72m funding announced today comprises £33m from UK Research and Innovation (UKRI) through the Industrial Decarbonisation Challenge (IDC) fund, and £39m of consortium partner contribution. The funding will allow HyNet North West to accelerate to a Final Investment Decision (FID) in 2023 for the initial phase, and become operational in 2025. Further elements of the HyNet North West project will follow, resulting in the distribution of up to 30TWh / year of low carbon hydrogen being distributed by 2030 - enough to displace 45% of natural gas used across the region.

HyNet North West has been under development for four years with work so far including extensive engineering studies and demonstration projects. Environmental survey work, supported by funding from the Cheshire & Warrington Local Enterprise Partnership Growth Fund, has recently begun and consultation with stakeholders, including the general public, will begin later this year as the planning process to gain consent for development.

“While reaching our climate targets will require extensive change across our economy, we must do so in a way that protects jobs, creates new industries and attracts inward investment - without pushing emissions and business abroad.

“Ahead of COP26, the UK is showing the world how we can cut emissions, create jobs and unleash private investment and economic growth. Today’s strategy builds on this winning formula as we transition low carbon and renewable energy sources, while supporting the competitiveness of Britain’s industrial base.

Additional material such as images, videos and quotes from key regional stakeholders can be found in our media information hub.

“We know we cannot reach net zero without decarbonising industry.  HyNet North West is a game-changing project of strategic importance.  It is uniquely developed to be low-cost and deliverable and will begin decarbonising the north west by 2025.

“Through the production of low carbon hydrogen and the capturing, and storing, of carbon dioxide, it offers a once-in-a-generation opportunity to create real change in how we produce and use our energy, establishing a cleaner world for future generations.  It will unlock a low carbon future economy in North West England and North Wales, not only reducing emissions but also creating and safeguarding jobs.  We are pleased to be working with Government on making the Green Industrial Revolution a reality.”

“When we first unveiled the plan for HyNet North West just three-and-a-half years ago, we knew quickly we were onto something big. This is a once-in-a-generation moment to effect real change.  Replacing fossil gas with hydrogen will achieve incredible carbon savings, create thousands of jobs and position the North West as a world-leader in this technology. Cadent and the whole HyNet consortium is determined to make that happen.”

“We are delighted with today’s announcement which confirms UK support for HyNet North West. This is a great stimulus to ensure that we can play our part in the UK Net Zero targets and deliver value through the re-use of our Liverpool Bay infrastructure for CO2 storage. The project is fully consistent with Eni’s commitment to energy transition, decarbonisation and the circular economy.”

“This is excellent news and another important milestone in the development of a transformational North West hydrogen economy.  Essar is committed to playing its part in the decarbonisation of the region and the two hydrogen production plants to be built at Stanlow are absolutely fundamental to the Hynet project. Together with our plans for the manufacture of  biofuels from waste, HyNet North West will be key to our ambition of being a long term provider of sustainable energy solutions for the UK.”

“Cutting CO2 emissions is a key priority for us, and we are excited to be one of the first UK cement producers working on carbon capture and storage (CCS) as part of this collaborative feasibility study.

“We’ve taken big steps towards reducing carbon emissions through the use of alternative fuels and have set ourselves an ambitious target of achieving a 50 per cent reduction in CO2 emissions by 2030, based on 1990 levels, and net zero carbon concrete by 2050.

“CCS at cement plants is a key part of this roadmap and the announced funding will allow work to start earlier. The project will be carried out at our Padeswood cement works in Mold, Flintshire, and we are looking forward to getting started as soon as possible.”

“HyNet North West is a great opportunity to be part of one of the UK’s most significant hydrogen and decarbonisation projects and INOVYN is delighted to play its role to deliver national scale hydrogen storage.”

“Climate change has never been higher up the agenda with our students, staff and local communities. Net zero will require the provision of new skills, innovation and collaboration if we are to deliver and I am delighted to see the University of Chester being the academic partner of choice in the HyNet North West Consortium, having supported the HyNet North West proposition since its inception in 2016.” 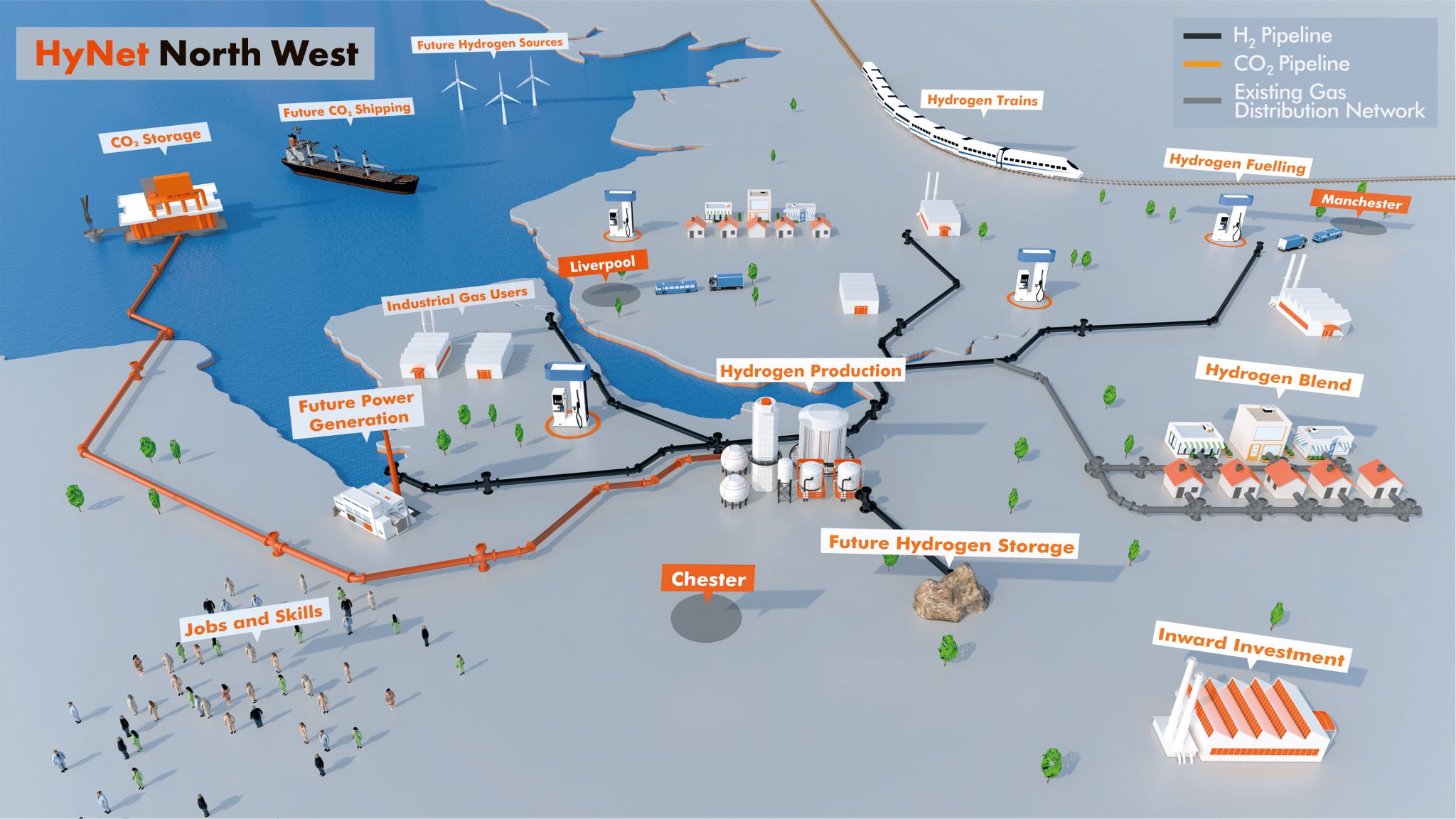