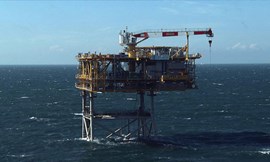 INEOS is now a top ten company in the North Sea and the biggest privately-owned exploration and production business operating in North West Europe.