The new deep-sea terminal, at the heart of the second largest Petrochemical region in the world, is now fully operational.

Hans Casier, CEO INEOS Oxide says: "This is a major step for INEOS which will secure the long term viability of its business located at the Antwerp site and connected along side the ARG pipeline. The terminal allows us to access ethylene from world markets at competitive costs, which means we can continue to compete successfully on a global basis."

The new deep-sea terminal, which is at the heart of the second largest Petrochemical region in the world, is now fully operational

Capable of unloading shipments of ethylene from the world’s largest ethylene vessels, the terminal directly supplies the needs of both those INEOS ethylene derivative plants located directly at the Antwerp site and those which are  connected along the ARG ethylene pipeline, which links Antwerp to Köln and the Ruhr industrial areas.

On opening the terminal, Minister-President of Flanders, Kris Peeters, said: "This new terminal gives a new strength to the petrochemical cluster in Antwerp, which for the past fifty years has brought skilled jobs and prosperity to Flanders. This investment shows that INEOS sees a future in Antwerp and is a sign that the policy of Flanders is starting to bear fruit."

INEOS has a very large demand for ethylene, supplied substantially by its own production from several steam crackers across Europe. To balance the shortfall the company has traditionally bought ethylene from other companies that sit on the ARG pipeline. The new one million tonne deep sea terminal now presents an opportunity for INEOS to import competitively priced ethylene from around the world, thereby improving its flexibility.

Hans Casier, CEO INEOS Oxide, said: "This is a major step for INEOS. The new terminal secures the competitiveness of our site and underlines the importance of our production facilities in Antwerp, located at the heart of the largest Petrochemical area of Europe. By opening up access for us to world ethylene markets we can now secure a competitively priced raw material for our European plants located at the Antwerp site and connected along the ARG pipeline."

By connecting the terminal to INEOS Oxide in Antwerp and beyond via the ARG pipeline to INEOS Oligomers LAO/PAO facility in Feluy Belgium, and INEOS Olefins & Polymers in Lillo and Köln, INEOS will now be able to supply competitively priced ethylene to efficiently balance its requirements across many of its main European facilities.

Some facts about INEOS Oxide

Ethylene is the key building block for the petrochemical industry. It is the main product of the steam cracking of hydrocarbons such as naphtha and ethane and the main raw material for INEOS Oxide, whose products are used in a very broad range of end applications: 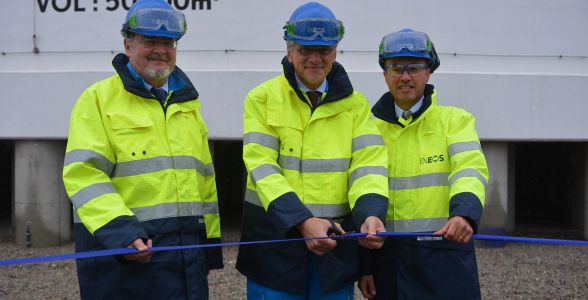 INEOS Oxide today announces Chocolate Bayou, Texas as the location for its new...

INEOS Oxide to double capacity of its new Ethylene Oxide and Derivatives...