Eliud Kipchoge proved No Human Is Limited when he became the first human in history to run a sub-two-hour marathon in the city of Vienna, Austria this morning. Kipchoge ran the 42.195KM distance in a remarkable time of 1:59:40:2.

The 34-year-old Kenyan’s landmark achievement began at 8:15AM CEST on the Reichsbrucke Bridge in Vienna in perfect weather conditions of around 9 degrees celcius and wind speeds between 0.5 - 1.5 m/s.

The circuit featured four [4.4] laps of the Hauptallee, the historic tree-lined avenue in The Prater, picked as the location of the INEOS 1:59 Challenge because of its long, flat straight sections and its protection from the wind.

Vienna came out to witness history being made with thousands of spectators lining the course to support Kipchoge and his team of 41 pacemakers, featuring some of the best middle and long-distance runners on the planet.

Kipchoge ran a consistent pace set by the electric timing car and the pacemakers of 2:50min/KM throughout the race with every single KM split being between 2:48min/KM - 2:52min/KM.

With the noise levels rising, Kipchoge crossed the line in a history-making time of 1:59:40:2 to become the first human to break the two-hour barrier for the marathon.

Kipchoge’s incredible achievement emphatically proved his own mantra that No Human is Limited and places him alongside other sporting greats such as Sir Roger Bannister – who ran the first sub-four minute mile in 1954 – and Usain Bolt who’s 100M world record of 9.58 seconds has stood since 2009.

On becoming the first ever person to run a marathon in under two hours, Eliud Kipchoge said:

“The pacemakers did a great job, they are among the best runners of all time. I thank them and appreciate them for accepting to do the job.

"I wanted to run under two hours and show human beings can do a good job and lead a good life. It shows the positivity of sport. I want to make the sport an interesting sport whereby all the human beings can run and together we can make this world a beautiful world.”

"That was sensational. It is quite difficult to believe it's actually happened because it happened so quickly. That last kilometre where he actually accelerated and came through on his own was just superhuman. I can't believe he did it.

"I can't believe he ran the first half marathon in less than an hour and then he had to do that again.

"Everything had to go right to do this and it's been immaculately well organised. It was especially brilliant to see the pacemakers because running is normally such a solitary sport and here they were all running for Eliud. They're the best athletes in the world and so full of enthusiasm, it's almost like a new sport for them." 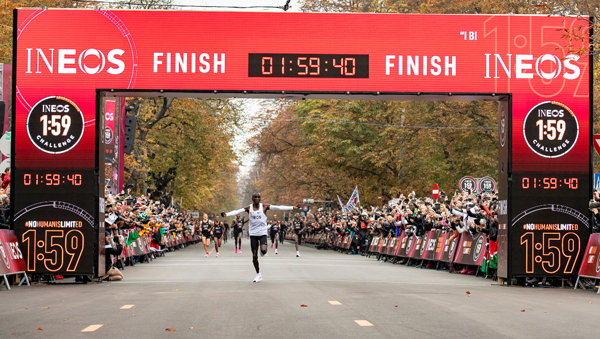