INEOS – one of the world’s largest petrochemical companies – has just announced that it achieved a record breaking profit of 4.3 billion euros of EBITDA last year. It’s a figure only rivalled by the very biggest names in the industry. The group is also repaying 1.2 billion of euros from its cash resources.

According to Jim Ratcliffe, INEOS founder and chairman, “These figures confirm that INEOS is doing better than ever. All the businesses are performing well and our successful refinancing shows that the market is clearly recognizing this fact”.

INEOS Group has also just closed its latest debt financing and repricing. This included raising 1.4 billion euros of new loans and repricing 3 billion euros of existing debt. The new borrowings will save the group over 100 million euros a year and were oversubscribed by 50%, showing the credit market’s strong confidence in the company.

John Reece, INEOS Finance Director, says, “We have spent the last three months working on a comprehensive cross border finance package including euro and dollar borrowings. I am pleased to say that we have achieved better terms across the board, saving the company 100 million euros annually and pushing out debt maturities until 2022 at the earliest”. This follows equally successful refinancings of our Inovyn and Styrolution businesses in 2016.”

The new borrowing also includes a “step down” facility whereby the repayment costs will be reduced if the company meets certain financial targets.

INEOS is composed of 27 businesses, organised into six main groups. INEOS Group is the largest of these clusters with Styrolution, INOVYN, Enterprises, O&P (UK) and O&P (South) making up the rest. Even the smallest of these businesses has a billion-euro turnover and is a substantial undertaking in its own right

Jim Ratcliffe, INEOS founder and chairman, adds, “INEOS is a unique business. We only set it up eighteen years ago, and it has never floated. It’s a tribute to everyone involved – owners, management and staff - that it is now doing so well”. 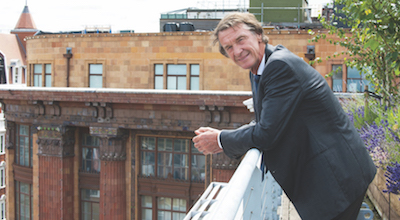