INEOS Enterprises agrees the sale of INEOS Styrenics to Synthos S.A. for €80m

The agreement to sell the business to Synthos S.A. represents an important step in the ongoing development of the EPS business.

Completion of the transaction is likely to occur in the second half of 2016, subject to customary regulatory approvals.

INEOS Enterprises has today confirmed it has reached an agreement in principle, to sell INEOS Styrenics, its Expandable Polystyrene Business (EPS), to Synthos S.A. for €80m.

INEOS Styrenics produces high quality Expandable Polystyrene (EPS) for the building, construction and packaging industries at manufacturing sites at Wingles and Ribécourt in Northern France and Breda in the Netherlands. The three production sites are supported by its technology Centre in Breda, which is a purpose-built research, development and product testing facility, including a research laboratory and pilot plant facilities. Customer Service, Logistics and Finance groups are also located in Breda. The business employs c. 250 people who will transfer as part of this deal.

“The combination of INEOS Styrenics with Synthos will accelerate growth and deliver additional benefits to customers of both companies, giving them access to expanded technologies and an enhanced product portfolio. It will also offer new opportunities for employees who will be part of a company that is focussed on, and strategically committed to the long term future of the expanded polystyrene market,” said Ashley Reed, CEO of INEOS Enterprises.

The agreement to sell the business to Synthos S.A. represents an important step in the ongoing development of the EPS business. Synthos S.A. is one of the largest manufacturers of chemical raw materials in Poland. The Company was the first European manufacturer of emulsion rubbers and is a leading manufacturer of polystyrene for foaming applications. The Company is traded on the Polish stock exchange with its headquarters located in Oświęcim.

Completion of the transaction is likely to occur in the second half of 2016, subject to customary regulatory approvals.

INEOS is a global manufacturer of petrochemicals, speciality chemicals and oil products.  It comprises 15 businesses each with a major chemical company heritage.  Its production network spans 51 manufacturing facilities in 11 countries throughout the world.  INEOS products make a significant contribution to saving life, improving health and enhancing standards of living for people around the world.  Its businesses produce the raw materials that are essential in the manufacture of a wide variety of goods: from paints to plastics, textiles to technology, medicines to mobile phones - chemicals manufactured by INEOS enhance almost every aspect of modern life.

INEOS Styrenics is the largest producer of expandable polystyrene in Europe with 310 thousand tonnes of production capacity, representing c. 20% of European capacity. INEOS Styrenics includes 3 EPS plants located at Wingles and Ribécourt in Northern France and Breda in the Netherlands, capable of producing a wide range of both white and grey EPS.

INEOS Styrenics is a part of INEOS Enterprises (http://www.ineosenterprises.com) which comprises a portfolio of businesses manufacturing chemical products in Northern Europe, with sales of €2bn around the world. The Company is focused on the developing needs of customers and rapid growth through investment in new products and manufacturing facilities or by acquisition. INEOS Enterprises employs 2000 people across sites in the UK, France, Germany, Sweden, Switzerland, Belgium, Netherlands, and the USA. 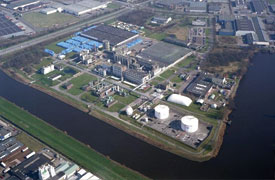