INEOS has today announced it has installed state of the art air filters at its London headquarters to address the poor air quality levels in the area. This new technology now means its staff enjoys some of the cleanest air In London.

INEOS has worked with the National Physical Laboratory on sophisticated air quality monitoring and with AECOM to develop the ground-breaking kit which it has deployed on the roof, in the street and inside the office to maximize its effectiveness.

Simon Laker, INEOS Group Operations Director said: “This new technology has massively improved air quality across the office. It’s a major boost for our staff and we are now planning to put in in all our other offices where air pollution is a problem.”

Data collected by INEOS revealed there were two major issues with London air quality - the level of Nitrogen Dioxide (NO2) and the level of particulates. Initial readings taken showed extremely high levels of NO2 and particulates, regularly peaking over the EU limit of 40 micrograms per cubic metre (µg/m³).

INEOS worked in collaboration with Melanie Williams Consulting and the multinational engineering firm AECOM to design and install the advanced filter systems.

Sir Jim Ratcliffe adds, “The welfare of our staff is hugely important to INEOS and we wanted to tackle the issue of air pollution, which is particularly serious in the big cities. It’s great news that our staff can now breathe the cleanest air in London and we are going to make sure staff in other locations can enjoy the same benefit”. 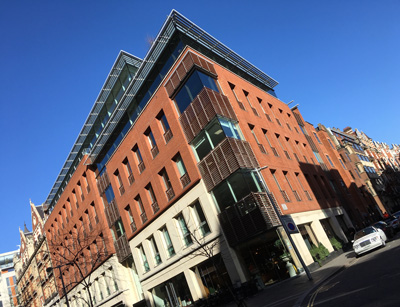