OGC Nice and INEOS are pleased to announce their partnership starting in the 2019-2020 season. The Global industrial group will become the main partner of the Gym and will display its logo on the front of the professional team's jerseys.

OGC Nice and INEOS share a taste for performance and competition, and through  this partnership have high ambitions for the future.

Already heavily involved in the world of sport, INEOS will be displayed on the jerseys of the Gym professional team for all Ligue 1 matches, and will also benefit from communication materials at the Allianz Riviera and on the Club's media, as well as Hospitality subscriptions for home matches.

INEOS will appear on the Gym's matchwear from the game against Cardiff on Saturday 27 July, the first of the Gym's British tour.

INEOS is the third largest chemicals company and the 50th largest business in the world, employing 20,000 people across 171 sites in 24 countries. It is a privately owned company with sales in 2017 of $60bn. Throughout INEOS’ history, the Company has supported sports groups from grassroots upwards, currently: 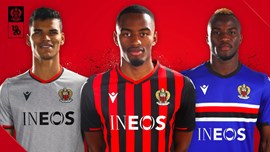