INEOS Nitriles is to restart production on its 4th reactor at its Green Lake, Texas Acrylonitrile facility.

INEOS Nitriles has today announced that it is to re-establish production on its 4th reactor at its Green Lake facility (Texas, USA), re-instating 100kt of capacity.

Despite extremely tough market conditions, INEOS Nitriles is convinced that a combination of long term advantaged US propylene, world leading technology and economies of scale will ensure that Green Lake will be able to compete globally.

Gordon Adams, Commercial Director INEOS Nitriles said at the IHS Conference in Singapore: "The addition of significant production capacity in China has forced worldwide acrylonitrile operating rates down to less than 80%, the lowest level since 2008. However, with its feedstock advantage, scale and leading technology, the INEOS Nitriles, Green Lake facility will be able to compete in the global market and as such we have decided to restart our 4th reactor to support the long term growth of our global customer base.”

INEOS Nitriles operates four plants worldwide, two in North America (Texas & Ohio) and two in Europe (Germany & UK). Green Lake, based in Calhoun County, Texas is one of the largest and most efficient plants in the world. It will once again be capable of producing 545,000 tonnes of Acrylonitrile per year.

As part of this announcement, INEOS Nitriles has also stated that it will invest in the scheduled turnaround on the Seal Sands asset in 2016.

INEOS Nitriles (http://www.ineosnitriles.com ) is a part of INEOS Group Holdings S.A. It is the world’s largest producer of Acrylonitrile and Acetonitrile and the world’s leading supplier of nitrile-based chemicals. The company maintains its leadership position through its technological know-how, market access and manufacturing capability. INEOS Acrylonitrile technology is used by over 90% of the world’s Acrylonitrile production units. The business currently has sales of around $2.5 billion per annum and employs 600 people across its manufacturing facilities in Köln (Germany), Seal Sands (UK), Green Lake (Texas, USA) and Lima (Ohio, USA). It has a total capacity to produce around 1.7 million tonnes, of product each year.

INEOS (http://www.ineos.com) is one of the world’s leading chemicals companies; a global manufacturer of petrochemicals, specialty chemicals and oil products. Comprising 15 businesses, with a production network spanning 65 manufacturing facilities in 16 countries. The company produces more than 40 million tonnes of petrochemicals. INEOS employs 17,000 people and has sales of around $51bn. Through its Joint Venture with PetroChina (Petroineos) it produces 20 million tons per annum of crude oil refined products (fuels). It also operates joint ventures with Solvay and Total. 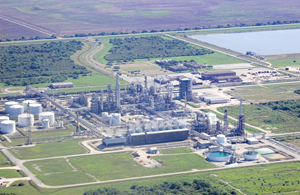