Scientists have discovered a new potential treatment that has the ability to reverse antibiotic resistance in bacteria that cause conditions such as sepsis, pneumonia, and urinary tract infections.

Carbapenems, such as meropenem, are a group of vital often ‘last-resort’ antibiotics used to treat serious, multi-drug resistant infections when other antibiotics, such as penicillin, have failed. But some bacteria have found a way to survive treatment with carbapenems, by producing enzymes called metallo-beta-lactamases (MBLs) that break down the carbapenem antibiotics, stopping them from working.

Highly collaborative research, conducted by scientists from the Ineos Oxford Institute (IOI) for Antimicrobial Research at the University of Oxford and several institutions across Europe, found that the new class of enzyme blockers, called indole carboxylates, can stop MBL resistance enzymes working leaving the antibiotic free to attack and kill bacteria such as E. coli in the lab and in infections in mice.

The researchers first screened hundreds of thousands of chemicals to see which would attach tightly to MBLs to stop them working, and which didn’t react with any human proteins, leading to the discovery of the indole carboxylates as promising new candidates. Using a process called crystallography to zoom in to take a closer look at how they work, the researchers found these potential drugs attach to MBLs in a completely different way to any other drugs – they imitate the interaction of the antibiotic with the MBLs. This clever Trojan Horse trick allows these potential drugs to be highly effective against a very wide range of MBL-producing superbugs.

After their initial discovery, the researchers chemically changed aspects of the drugs to make them as effective as possible, and tested them in combination with carbapenems against multi-drug resistant bacteria in both dishes in the lab and in mice. The potential new drugs in combination with carbapenems were found to be 5 times more potent at treating severe bacterial infections than carbapenems alone, and at a less concentrated dose. Importantly, these potential drugs show only mild side effects in mice.

Carbapenems work in a similar way to penicillin and other related antibiotics called beta-lactams – they stop bacteria from forming new cell walls when they try to grow and multiply, which kills the bacteria. Carbapenems are more stable than other similar antibiotics, and many of the methods bacteria employ to resist antibiotics don’t work on carbapenems.

However, resistance arose to carbapenems through, for example, genes that code for MBLs, which can quickly pass from bacteria to bacteria. There is no licensed drug that targets MBLs, and only one in clinical trials – so there is an urgent need to find new drugs that overcome resistance, protect carbapenems and keep these precious medicines working for longer.

The World Health Organisation (WHO) estimates that by 2050, 10 million deaths will be due annually to antimicrobial resistance, overtaking the number of cancer related deaths – making it one of the most pressing health problems faced by humanity today.

“An increase in antimicrobial resistance is absolutely inevitable. It a massive problem because collectively we haven’t been making enough new clinically useful antibiotics. As a society we must find ways both to make new antibiotics and protect the ones we have. The alternative is that routine modern medicine will be disrupted in a manner simply too horrendous to conceive.

“The collaborative efforts of academics and industry scientists have discovered a brand new class of drug that can shut down one of the ways bacteria fight back against antibiotics. This research is the culmination of years of work, from screening huge libraries of chemicals, through to testing the best drug candidates in pre-clinical studies in the lab. We are actively progressing this new drug type towards clinical trials in people, most importantly in lower and middle income countries where resistance to carbapenem antibiotics is widespread.”

“Academia, given the space to create, can produce something amazing – and that’s what we have seen here. With the fantastic support we have received from INEOS, we can replicate this type of drug discovery programme within the IOI for multiple different bacterial targets and applications.

“As well as drugs that overcome resistance to current antibiotics, in the IOI we wish to discover entirely new types of antibiotics – not only to fight bacteria that cause infections in humans, but in bacteria that affect farm animals. These animals, such as chickens and pigs, are a source of human antimicrobial resistance, so we’re looking to develop drugs to use exclusively in agriculture and help protect against multidrug resistant infections.”

For all media enquiries, please contact Claire Hastings on claire.hastings@incisivehealth.com or 07757 245 482.

The Ineos Oxford Institute for Antimicrobial Research (IOI) was established at the University of Oxford in January 2021 to advance research, education and collaboration in the search for solutions to one of the biggest public health challenges of our time. Our mission is to lead science that will enable the development new of antibiotics and provide the evidence to support transformational change in how we address antimicrobial resistance. We are collaborating with world class academic talent across the University of Oxford, the UK and globally, with a primary research focus on antibiotic resistance in bacteria.

The University of Oxford

Oxford University has been placed number 1 in the Times Higher Education World University Rankings for the sixth year running, and at the heart of this success is our ground-breaking research and innovation. Oxford is world-famous for research excellence and home to some of the most talented people from across the globe. Our work helps the lives of millions, solving real-world problems through a huge network of partnerships and collaborations. The breadth and interdisciplinary nature of our research sparks imaginative and inventive insights and solutions.

INEOS is the world’s third largest chemical company. It has a turnover of $61bn and employs 26,000 people across 36 businesses, operating 194 sites in 29 countries throughout the world.

INEOS products make a significant contribution to saving life, improving health and enhancing standards of living for people around the world. Its businesses produce the raw materials that are essential in the manufacture of many goods: from paints to plastics, textiles to technology, medicines to mobile phones - chemicals manufactured by Ineos enhance almost every aspect of modern life. Its facilities provide the raw materials and products that meet society’s needs. Its scientific innovations are also helping in the move towards a lower carbon economy. And it is also playing a vital role in everything from reducing plastic waste to creating a more circular economy.

INEOS products play a vital role in medical and pharmaceutical sectors, supplying over 300 products, many of which are EU/US Pharmacopoeia and US FDA approved. INEOS directly responded to the Covid-19 pandemic in March 2020 by building 7 new production facilities in the UK, France, Germany and the United States to produce hand sanitizer with 75% ethanol as recommended by The World Health Organisation. Each facility supplied 1 million bottles per month for free to hospitals and frontline healthcare services across Europe and the USA during the pandemic peak, and has now made the bottles available for retail to the general public.

Sir Jim Ratcliffe was knighted in 2018 for services to business and investment. He is the founder and Chairman of INEOS. Sir Jim has funded the Ineos Oxford Institute with INEOS co-founders Andy Currie and John Reece. The trio have funded several initiatives in the public health space to date, including backing childrens running programmes GO Run for Fun and The Daily Mile, funding a new wing at the UK’s Defence and Military Rehabilitation Centre, funding a children’s A&E at Southampton Hospital and donating critical supplies of INEOS hand sanitizer to the front lines of the Covid-19 pandemic. The INEOS team see antimicrobial resistance as one of the biggest global threats in the near future and have provided funding to establish the IOI in order to support urgent scientific research in the field.

IMI’s European Lead Factory is a unique, collaborative platform for early drug discovery. It offers unrivalled opportunities to any European academic or SME working in any therapeutic area for the discovery of new diagnostic or drug lead molecules; compounds that can result in the development of novel treatment options for patients. To this end, the European Lead Factory provides a high-quality compound library, industry-standard screening facilities and drug discovery expertise. The European Lead Factory was launched in 2013 and is managed by an international consortium of 30 public and private partners. www.europeanleadfactory.eu

In ENABLE, over 50 European partners from academia and industry, co-led by GlaxoSmithKline and Uppsala University, joined forces in a 7-year project funded by the Innovative Medicines Initiative (IMI) to develop novel antibiotics against key Gram-negative bacteria such as E. coli, K. pneumoniae, P. aeruginosa and A. baumannii. ENABLE has rapidly succeeded in building a bottom-up drug development engine with an engaged group of highly competent scientists all working towards the development of new drugs. Contact Lilian Löwenau for any communication related question (info@nd4bb-enable.eu). ENABLE is part of the ND4BB programme. For more information on the ENABLE project, visit www.nd4bb-enable.eu

The research leading to these results has received funding from the Innovative Medicines Initiative Joint Undertaking under grant agreement n°115583, resources of which are composed of financial contribution from the European Union’s Seventh Framework Programme (FP7/2007-2013) and EFPIA companies’ in kind contribution. The ENABLE project is also financially supported by contributions from Academic and SME partners. For more information about IMI, visit www.imi.europa.eu

The Latvian Institute of Organic Synthesis

Latvian Institute of Organic Synthesis (LIOS) is a state research institute specializing in organic chemistry, pharmaceutical research, molecular biology, and bioorganic chemistry. LIOS is the leading drug discovery and development centre in the Baltics and has more than 60 years of experience in drug design and technology development. IOS delivered 18 original and more than 70 generic medicines to its industrial partners. https://www.osi.lv/ 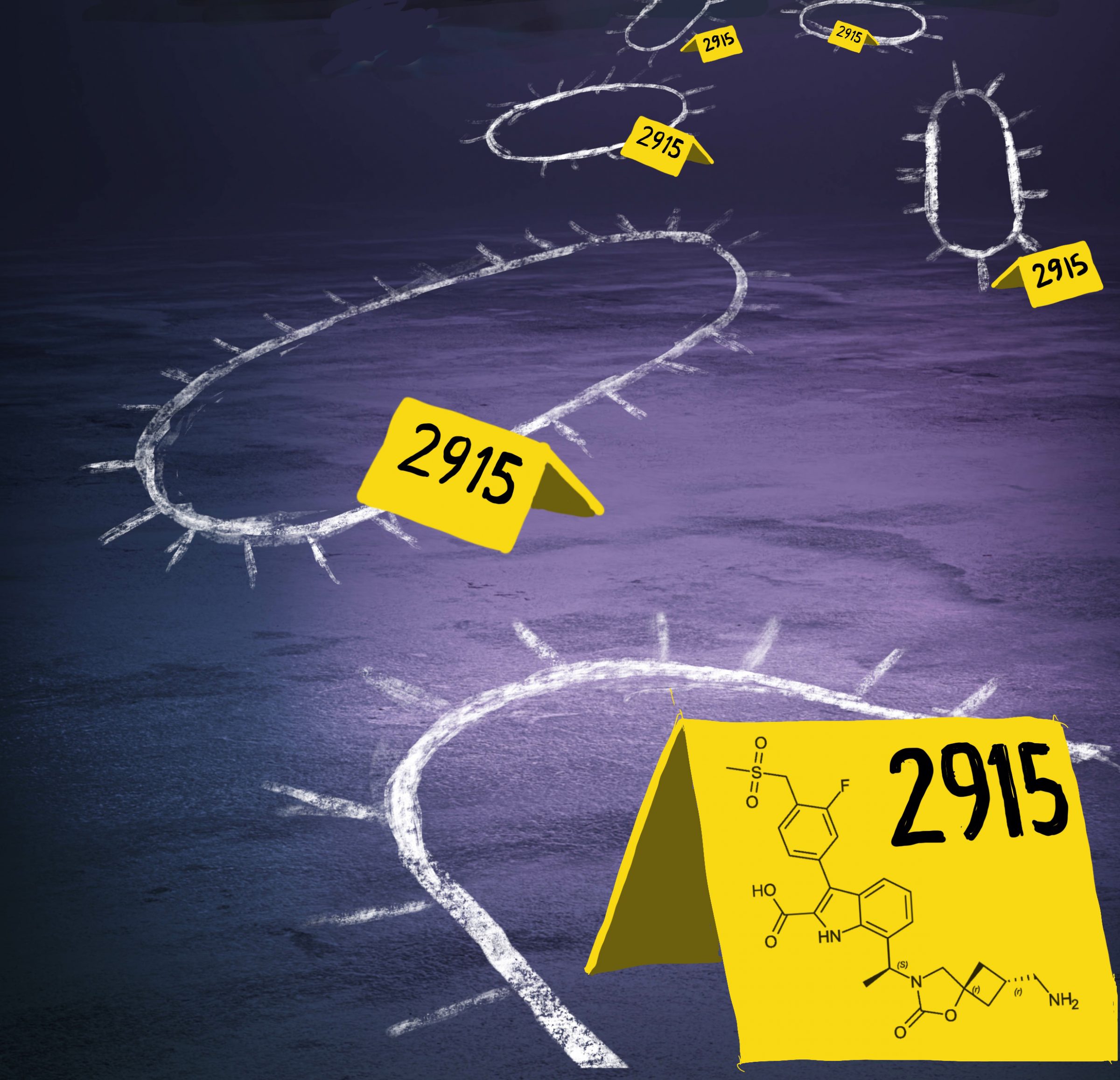 Find out more about antimicrobial resistance, and our work to tackle it.