The Protocol sets the foundations and rules of participation for all teams in the 37th America’s Cup and records the items of mutual consent under the America’s Cup Deed of Gift agreed between the Defender and the Challenger of Record which establishes the basis for a multi challenger event.

Defender Emirates Team New Zealand’s CEO Grant Dalton said: “As we saw with AC36, after 170 years, as the oldest trophy in international sport, the America’s Cup maintains its unique position of balancing the traditions of the Deed of Gift while continuing to push the boundaries of innovation, technology and design in the boats, the event, the broadcast and the commercial aspects of the event.

Maintaining this balance is the ongoing challenge and responsibility of the Defender and Challenger of Record as we aim to progress into the 37th edition of the America’s Cup in the ever-changing environment and demands of global sports as well as a determination to drive sustainability through innovation via hydrogen technology for the marine sector which we both believe is reflected in this Protocol.”

INEOS Britannia CEO and Team Principal Sir Ben Ainslie said: “As Challenger of Record, INEOS Britannia has sought with the Defender, Emirates Team New Zealand, to make the next America’s Cup less expensive and more inclusive. The Protocol this time around will see reduced team operating costs without compromising any of the technical development which the Cup is so famous for. There is an opportunity for change, so for AC37 we will see the first Women’s America’s Cup Regatta and we also welcome back the Youth America’s Cup.”

An updated ‘Version 2’ of the AC75 Class Rule has been released from the last America’s Cup which specifies the latest requirements to be compliant with the class rule including modification requirements for new teams buying ‘Version 1 AC75’s’ that were built and used by teams competing in AC36.

Cost reduction has been a key consideration as part of the balance in the development of the AC37 Protocol including:

The shared recon programme whilst reducing costs, is also aimed to give America’s Cup fans the inside track on the testing and development on the water by all the teams. The observations will be made public via AC media channels so that fans can stay up to date with the latest developments as they emerge from the sheds throughout the whole of AC37.

With a view to opening the doors and the continued drive to increase the global audience of the America’s Cup and the sport of sailing, a condition of entry to competitors is they agree to be part of a potential behind-the-scenes documentary series. The intention of this is to bring the secrecy, the drama and all the teams’ personalities into the limelight.

There will be up to three Preliminary Regattas, the first two raced in AC40s, the last one at the Match venue in AC75s. The Challenger Selection Series and the America’s Cup Match will be held in 2024, with the Match Venue and approximate event dates to be announced by 31st March 2022.

The Protocol outlines restrictions on when the AC75’s can be sailed. With the anticipated benefit angled towards new Challengers to AC37, existing teams are not permitted to sail their AC75s’ before the 17th September 2022, however new Challengers entering AC37 that have purchased a second hand “Version 1 AC75” are permitted to sail their AC75 for 20 days from 17th June 2022. There are other restricted sailing periods which are provisional and will be confirmed once the Match venue is announced.

The Crew Nationality Rule will require 100% of the race crew for each competitor to either be a passport holder of the country of the team’s yacht club as of 17th March 2021 or to have been physically present in that country (or, acting on behalf of such yacht club in Auckland, the venue of the AC36 Events) for 18 months of the previous three years prior to 17th March 2021.  As an exception to this requirement, there will be a discretionary provision allowing a quota of non-nationals on the race crew for competitors from ‘Emerging Nations.’

As part of the ongoing drive for innovation and new clean technology in the America’s Cup, it is now a mandated obligation of all teams to build and operate two hydrogen powered foiling chase boats for their campaign (subject to proof of concept). It’s hoped showcasing proven hydrogen technology in the marine sector will help create a game-changing pathway for the wider industry and lead to a significant reduction in its carbon footprint. These boats must be a minimum of 10 metres long and the usage and performance criteria is set out in the Protocol. 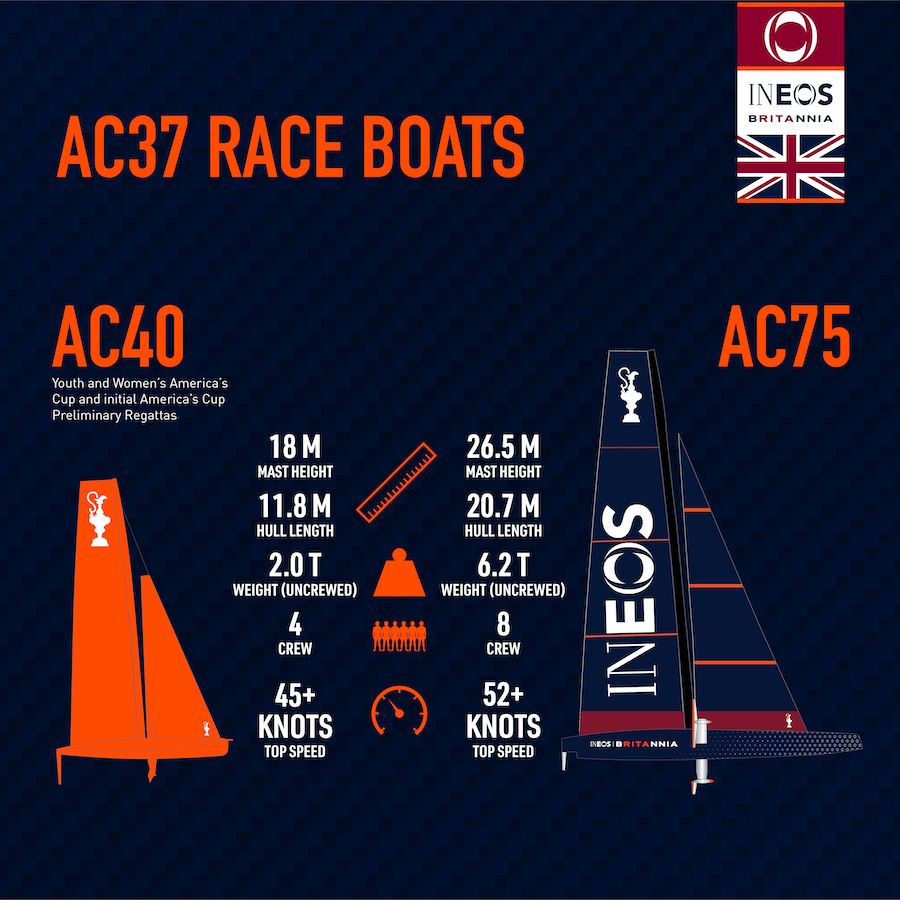 “A significant proportion of the team’s carbon footprints is in their on-water operations, through their long days of testing, development and training,” said Grant Dalton.

“So for the past year we have been researching, designing and are now building a prototype hydrogen-powered foiling chase boat which will have a dramatic effect on the reduction of the team’s carbon footprints, as well as pushing the development of hydrogen in the marine sector.”

Race Management will be entirely independent of the event organisation and will be led by the Regatta Director. The umpires and jury will manage all on the water rules and disputes for all events.

“ A lot of work has gone into the AC37 Protocol and we extend our thanks and gratitude to Emirates Team New Zealand and the Challenger of Record - the Royal Yacht Squadron and INEOS Britannia -  for their hard work and commitment to an exciting 37th America’s Cup.

We especially welcome the inclusion of both the Youth and Women’s America’s Cup as part of the protocol and event, and believe these are important developments that will increase participation and inclusion within the America’s Cup going forward. We are also pleased to keep pushing the boundaries of innovation, technology, sustainability, participation, broadcast and the commercial aspects of the event. And so we think we have taken a good step forward in that respect.

The Royal New Zealand Yacht Squadron will continue to support Team New Zealand as they fulfil their role in the planning, funding and delivery of this AC37 campaign and event.“

“We are delighted with the result of this positive collaboration between the Defender and the Challenger of Record which has resulted in a truly progressive protocol for the 37th America’s Cup designed to promote fair competition and sustainability. Furthermore, we believe that the cost reduction measures and introduction of a women’s and youth event provide new and exciting opportunities within our sport.“ 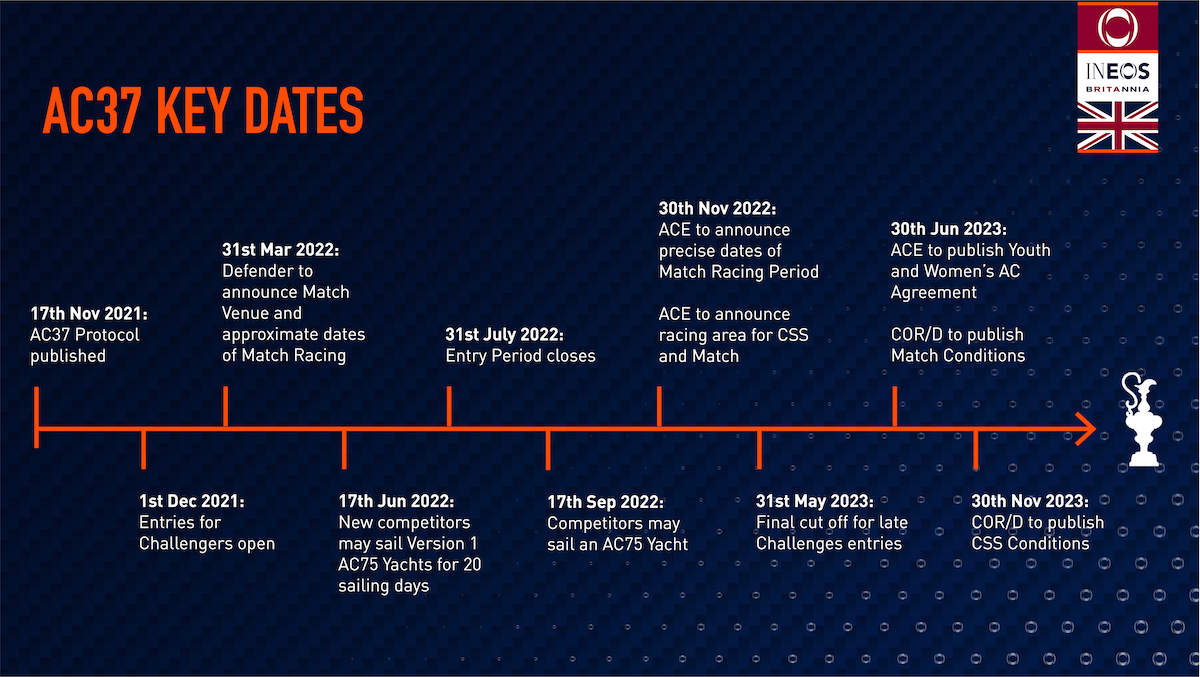 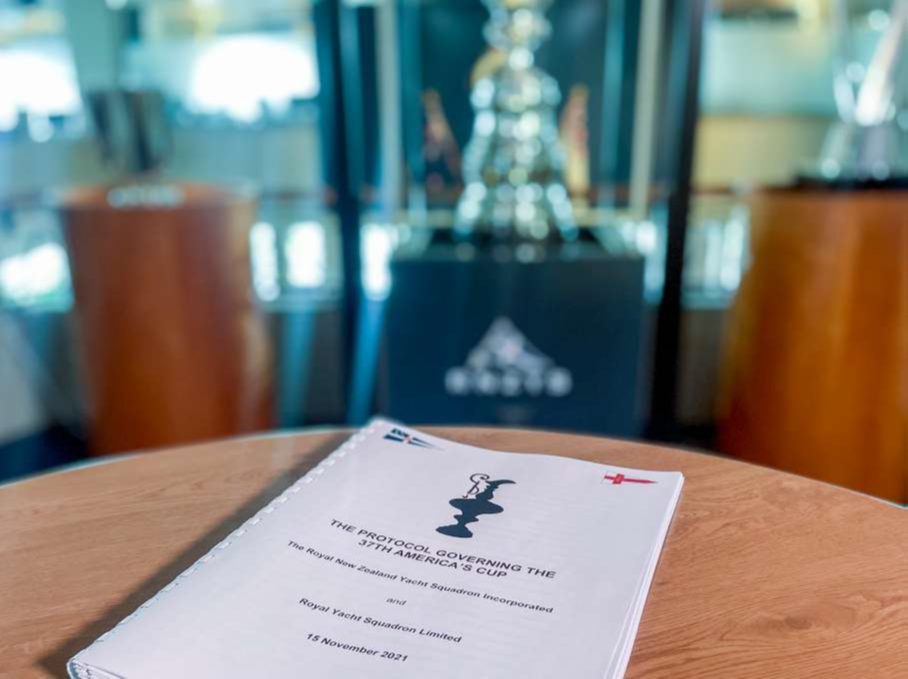