INEOS has today confirmed it has accepted delivery in Europe of three of four new gas barges. They will become the largest gas barges operating on the River Rhine and are the first to be fully built to the new ADN gas barge 2019 standard.

The new barges will enable the efficient and competitive delivery of butane gas from the ARA region (Antwerp, Rotterdam, Amsterdam) to the INEOS ethylene cracker facility at Koln, Germany. In addition, they will provide INEOS Trading & Shipping with options to effectively trade butane in Europe.

The build project was managed by Imperial Gas Barging, who will also operate the barges on behalf of Ineos. Carmichael added: “We are extremely pleased with the dedication of the Imperial team and the professionalism of the crews. We also were impressed with the focus and cooperation of the two lead shipyards in delivering these sister ships”

The construction of the barges was split between 2 Dutch companies:

The gas tanks were manufactured by Barlage GMbH. The barges all use a veth pod-drive system, rather than the more usual shaft propulsion

The project was successfully completed with the support and performance of several subcontractors, with the last few weeks particularly challenging as Covid issues became more of a concern.

The barges will be named Aloo, Brinjal and Onion, taking their names from the Indian “Bhaji” theme. There are two sizes of barge:

Veka: Onion is bigger at 110m*17.5m with 6 tanks holding 5538 cubic metres. A fourth sister ship will be delivered later this year.

These barges are part of the ongoing investment being made by INEOS in supply chain flexibility for its European cracker facilities. Today’s announcement builds on the commitment already made of more than $5bn into the supply of feedstock ethane from the USA, securing the competitiveness of its gas crackers in Europe, located at Grangemouth, UK and Rafnes, Norway 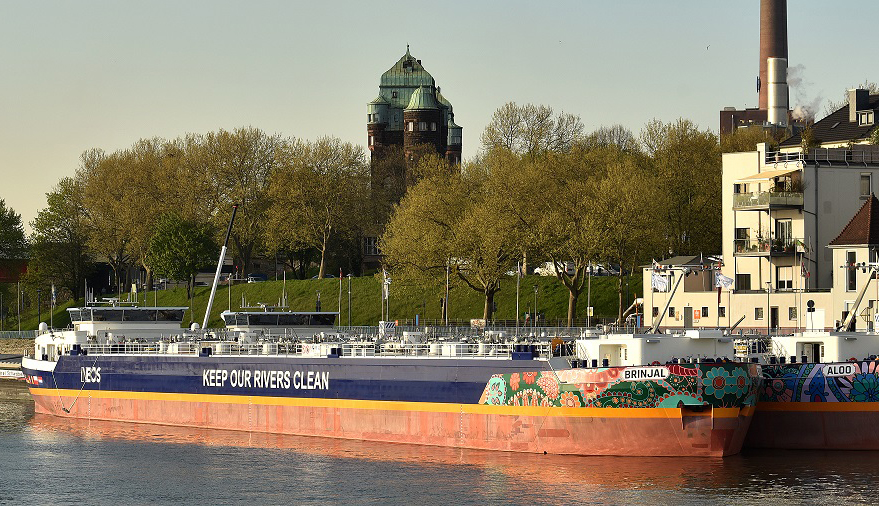