Today in Houston, the world’s largest ethane carrier was named as the ‘Pacific INEOS Belstaff’ after the iconic Belstaff clothing brand, which is also owned by INEOS.  The new ship joins INEOS’s growing carrier fleet and was primarily built to transport US ethane both to China and Europe.

As the world’s first 99,000 CMB VLEC (Very Large Ethane Carrier) the vessel is fitted with type B tanks, a brand-new design for transporting ethane. The tanks allow optimisation of vessel capacity, fitting closely to the external shape of the vessel.

The ship also has the potential to carry other products such as ethylene and LPG.

David Thompson, CEO of INEOS Trading & Shipping, says: “Today’s ceremony is another major milestone in the expansion of INEOS’s shipping & trading capabilities. As always at INEOS we have innovated and invested in the future, so I am delighted that we now operate the world’s largest VLEC and I look forward to this vessel transporting vital feedstocks for years to come”.

At the ceremony, Fran Millar, CEO of Belstaff, formally named the ship and in so doing became its official godmother. In addition to being named after Belstaff, the ship also carries the brand's famous slogan, ‘Built for Life’ proudly emblazoned on its side.

Fran Millar, CEO of Belstaff, says: “I am proud to be godmother to this new and innovative carrier as it becomes a part of the growing INEOS fleet. In displaying the Belstaff brand along the length of the ship it also provides Belstaff with an enormous billboard introducing our logo to some very new places around the world.”

Built in Jiangnan, China and operated by Pacific Gas, the Pacific INEOS Belstaff is made of approximately 18,000 tonnes of steel and 40,000 meters of piping. At 230m it is longer than two football pitches combined (8 basketball courts).

Mr John Lu, President of Pacific Gas says: “We are delighted to deliver the Pacific INEOS Belstaff and start serving INEOS’ ground-breaking ethane trading business around the globe. Today marks the beginning of a very long journey with our partner INEOS. We will maintain the highest standards for the operation of the vessel and meet the fullest satisfaction of our customers.”

The launch of the Pacific INEOS Belstaff takes the INEOS ethane fleet to eleven vessels consisting of 3 VLEC’s, and 8 ‘dragon’ ships, which have been regularly transporting ethane across the Atlantic for over 5 years. A fourth VLEC, is set to launch this Spring 2022.

About Pacific Gas:  Pacific Gas(Hong Kong)Holdings Limited is dedicated itself to provide integrated and yet competitive shipping services for a full range of clean energy and its derivatives by products in the international market, with offices located in Hong Kong, Shanghai, Singapore, and Mumbai.  Through its proactive approach and long-term cooperation with both upstream and downstream customers worldwide, the company has developed into a global leading facilitator and arranger by establishment of its oceangoing shipping platform, providing diversified shipping service for Methane (LNG), Ethane, Propane and Butane (LPG), and various petrochemical gas products including Ethylene, Propylene, Butadiene etc. 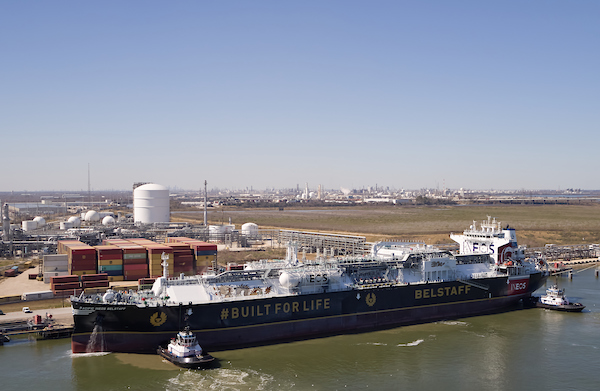