INEOS Shale has today announced that with its co-venture partner Reach it has lodged a petition for judicial review of the recent decision by the Scottish Government to “effectively ban” onshore unconventional oil and gas extraction in Scotland by introducing a new planning policy of "no support."

INEOS believes that there were very serious errors within the decision-making process, including a failure to adhere to proper statutory process and a misuse of Ministerial power.

The announcement in October brought to an end a two-year wait during which the Scottish oil and gas industry was left in limbo. With an official ban on shale and all other forms of unconventional oil and gas extraction, Scotland will miss out on the numerous economic and employment benefits that will be enjoyed by England, including an estimated 3,100 Scottish jobs. The decision also closed the door on hopes for the estimated £1 billion to be received by local communities as a result of a healthy shale industry.

Tom Pickering, Operations Director at INEOS Shale, said: “The decision in October was a major blow to Scottish science and its engineering industry, as well as being financially costly to INEOS, other businesses and indeed the nation as a whole. It also removed at a stroke the potential for the country in these uncertain times to secure its own indigenous energy supply. We have serious concerns about the legitimacy of the ban and have therefore applied to the Court to ask that it review the competency of the decision to introduce it.”

The decision also raises an important strategic question about how Scotland does business. The 2015 moratorium was announced at a time when INEOS and other shale gas operators in Scotland, in reliance on what was then a supportive national and local planning policy position, had invested millions over the best part of a decade in acquiring licences and obtaining planning permissions to construct drilling sites in discrete, safe locations. Such investment has been rendered worthless as a consequence of the ban, even in areas where no fracking was proposed. This despite the panel of scientific experts appointed by the Scottish Government concluding that shale development is capable of being managed safely.

Tom Pickering concluded: “Natural gas keeps the power on and homes warm in Scotland as with the rest of the UK, and shale has the potential not only to meet these needs but also to have a positive impact on the economy and energy security. INEOS, Reach and other operators have invested significantly in unconventional development over the years, against a supportive regulatory and planning backdrop. If Scotland wants to continue to be considered as a serious place to do business, then it cannot simply remove the policy support that attracted that investment in the first place without proper procedures being followed and without the offer of appropriate financial compensation. In the light of these failings, INEOS has been left with no option other than to raise this legal challenge." 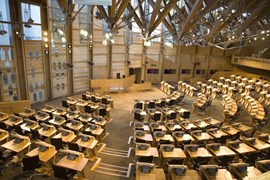