INEOS Automotive has announced Projekt Grenadier's senior management team, updated the search for the site, and outlined the engine options currently under consideration.

The launch of this interactive website marks the first milestone in the 600 million project to build the world's best and most uncompromising 4x4.

"Projekt Grenadier is starting to capture the public's imagination and this new website is the next milestone on the road", says Jim Ratcliffe, INEOS Chairman. "Our decision to build a brand new world- class 4x4 is an adventure story and we want everyone to share it."

Projekt Grenadier – the name given by INEOS to its plan to build a world-class uncompromising 4 x 4 off-roader – reaches a new milestone today with the launch of an interactive website and social media channels.

The website profiles the go-anywhere off-roader’s new management team, as well as featuring a series of videos revealing the genesis of the project, initial thoughts on the vehicle design and the current search for a suitable manufacturing site. This and the new social feeds will provide a window on the project for the general public, sharing regular updates throughout the vehicle’s development – and will even invite followers to participate in the process by sharing their views and designs.

The website launch took place at The Grenadier pub in London’s Belgravia. It was here that Jim Ratcliffe, the chairman of INEOS, first came up with the idea of building a world-class uncompromising 4x4 off-roader to replace the discontinued Land Rover Defender.

INEOS has committed to spending £600 million on the vehicle and expects to create up to 7,000 direct and indirect jobs. A range of models are planned for sale across the world including multiple wheel-base options, as well as diesel, petrol and hybrid engines to suit different markets.

Dirk Heilmann, the CEO of INEOS Automotive and leader of Projekt Grenadier, says, “Our job is to create the world’s best and most uncompromising 4x4, and we are steadily moving forward with the project. We have recruited a first-class management team, are making good progress in our search for a manufacturing site, and we are now launching the new Projekt Grenadier interactive website.”

INEOS Automotive’s new off-roader will have the spirit and straightforward engineering of the old 4x4s but with a massive leap forward in reliability. It will appeal to explorers, farmers and off-road enthusiasts as well as city dwellers seeking adventure.

“The building of our new 4x4 is an adventure story in itself,” says Jim Ratcliffe, INEOS Chairman. “We are used to taking on big, innovative projects and delivering them safely on time and on budget. We have vast amounts of manufacturing and engineering expertise, and a proven track record of success and we look forward to applying this to create a world-class 4x4.”

NOTES TO THE EDITOR

THE BIRTH OF PROJEKT GRENADIER

One Wednesday evening late in 2015, Jim Ratcliffe, the visionary INEOS Chairman and off-roading enthusiast was seated with friends at The Grenadier pub in Belgravia mourning the demise of the Defender – would we ever see such a rugged, adventurous off-roader again? It wasn’t long, however, when conversation turned to creative thinking – could we have a shot at building a worthy successor? After a bit of dreaming, an extensive feasibility study and some international market research, an ambitious plan began to take shape: a concept for a brand new, uncompromising 4x4, which would combine extensive off- road capability with 21st century reliability.

Since then, Jim has brought together a passionate team of experts and off-road enthusiasts from across the world to set about creating brand new, old-souled 4x4 that will combine reliability, durability and an uncompromising adventure capability. They have envisioned a British-inspired, German-engineered, true working vehicle, which can drive cross-country, pull a plough, lead a safari, clear a minefield, cross a river and drive up to Buckingham Palace...

Projekt Grenadier really began to take shape in 2016 with the birth of INEOS Automotive, a dedicated new business born from INEOS, focusing solely on becoming a world-class player in the auto industry. With the first proposed car set to be a British-inspired, German-engineered off- roader, the undertaking was first internally nicknamed, and later more widely dubbed ‘Projekt Grenadier’. It seems to have stuck.

The international Projekt Grenadier team have decades of manufacturing, engineering and adventuring experience between them, and a worthy mission.

4x4 vehicles of all shapes and sizes share a rich and proud heritage. Since the early conception of four-wheeled drives, vehicles such as the Willys Jeep and Jeffery Quad have shaped military and civilian history, and have evolved into legends such as the Defender, Land Cruiser, and the G-Wagon.

However, a quick look around any car show room today will show you that there is a distinct gap in the market, with an ongoing evolution towards ‘jelly mould’ SUVs rather than rugged, practical off-roaders. Projekt Grenadier plans to bridge this gap. And since the announcement that INEOS would build a new off-roader, interest in the project has grown considerably. We are now keen to share the development of this exciting undertaking with the general public, and gather advice and input from passionate off-roaders everywhere. Our new website (www.projektgrenadier.com) and social media channels will invite participation and share our journey to driving our first vehicle off the production line.

As the leader of one of the world’s largest and most successful manufacturing businesses, visionary INEOS Chairman Jim Ratcliffe is well-practised at bringing world-scale innovative projects to life with his trusted senior teams.

Under the leadership of CEO Dirk Heilmann, the core Projekt Grenadier team have decades of varied engineering and manufacturing expertise, which they are supplementing with input from leading automotive experts across the globe. As the project develops, its leaders and key contributors will be sharing their experiences, insights and personal experiences of the vehicle development through the Projekt Grenadier website and social media channels. Follow to find out more!

THE LEGEND OF THE GRENADIER PUB

Tucked away down the exclusive Wilton Mews, on the corner of Old Barrack Yard, the Grenadier pub is a landmark in its own right. Built-in 1720, it served as an Officers’ Mess for The First Royal Regiment of Foot Guards and was even frequented by King George IV.

As a result of the heroism shown whilst fighting off the French Grenadiers at Waterloo in 1815, The First Royal Regiment of Foot Guards was renamed by Royal Proclamation as the ‘First Grenadier Regiment of Foot Guards’, thus becoming the only regiment in the British Army to be named for one of its battle honours. The Grenadier became licensed premises in 1818 to serve as The Guardsman Public House and was later renamed The Grenadier.

Over the years many stories and legends have formed around The Grenadier pub. One of the better known is that of Cedric, the pub’s infamous ghost. Hearsay has it that Cedric was a Grenadier who was murdered over a debt incurred by cheating at a game of cards. Visitors of that time attempted to pay off his debt by attaching money to the ceiling, so that he could pass to the other side. In recent years, this has been done by tourists, adventurers, families, celebrities, and even royalty who have frequented the pub, covering the ceiling with transatlantic notes as a means to mark their visit and receive good luck in return.

On 1st September 1955, The Grenadier was the starting point for the historic Oxford and Cambridge Far Eastern Expedition, now known as the ‘First Overland’ expedition, undertaken by six Oxford and Cambridge university students in two Land Rover Series I Station Wagons from London to Singapore. It was the first time that this route – and a route this long – had been undertaken by vehicle, and it was backed by David Attenborough and broadcast on the BBC. It inspired a wealth of overland exploration in its wake.

On September 19th, at the official launch of the project, Jim Ratcliffe pinned a note to the ceiling of The Grenadier Pub to symbolise the beginning of a new Grenadier story: Projekt Grenadier. 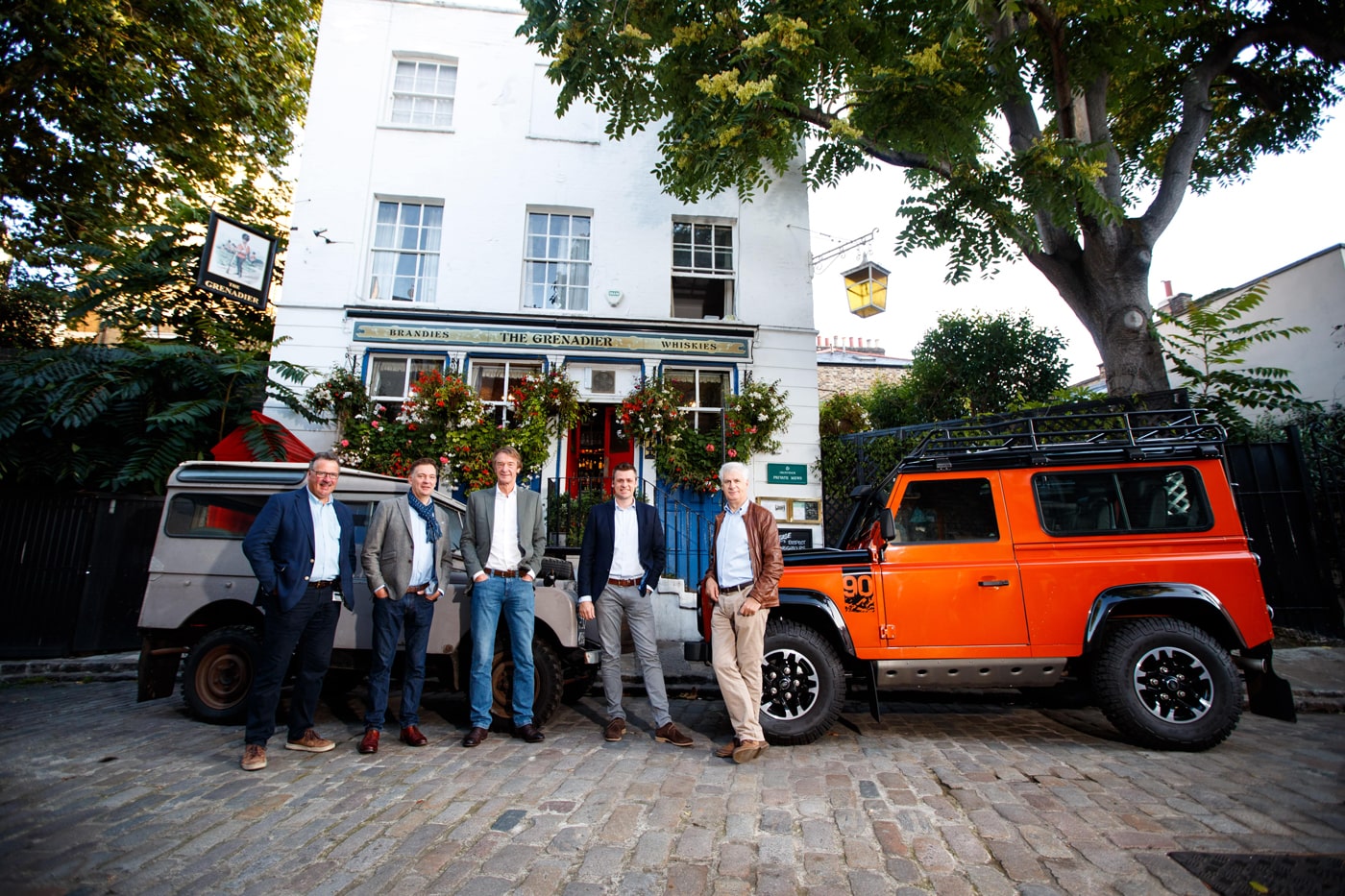