Our world-scale petrochemical plants make around 1.4 million tonnes per annum of product, used as the building blocks in the manufacture of household items that society depends upon every day. 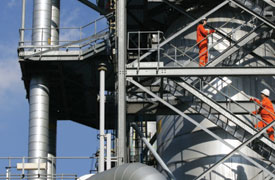 Our world-scale petrochemical plants make around 1.4 million tonnes per annum of product, used as the building blocks in the manufacture of household items that society depends upon every day. These include synthetic ethanol, ethylene, propylene and polymers: polyethylene and polypropylene.