INEOS Aromatics Geel, Belgium, team members took on the challenge of cycling 1,000 kilometers in seven days for Kom op tegen Kanker (Stand up against Cancer), racking up more than 4300km as a team and raising more than 6000Eur for the charity.

We hope you enjoy this wonderful report from the team:

Covid-19 interfered for the second year in a row, but our hearts and determination were stronger.

During the bank holiday week from Monday May 10th to Sunday May 16th the yearly cycling challenge was open, also this year in a virtual form. Either cycling one of the eight set out courses spread over the Flemish provinces, or a course you made yourself. Every km counted. All set courses were about 125km and in each province the north and south track could be coupled together to form a 250km track.

The INEOS Geel Kom op tegen Kanker (KOTK) cycling team took up the challenge, with Sven and Alex going for the full 1000km and other team members striving to cycle as many km as feasible. A tough challenge, but at the right pace we would make it. Our only concern: a cold, showery weather forecast…

In West-Vlaanderen, the North route went around Bruges, the South track through Flanders fields, passing under the Menenpoort in Ieper.

Oost-Vlaanderen South gave us a flavor of the Tour of Flanders course. The Oude Kwaremont, Kortendries, Tiegemberg… and every now and then some cobble stones. All holy ground for cycling enthusiasts. The North track took you on roads between the rivers Dender and Durme.

Mechelen, the host city of the normal editions, was the starting point for the Antwerpen and Vlaams-Brabant tracks. The South course took us to parts of the world championship course that will be used later this year. The Moskesstraat, towards the end 10%+ over cobblestones and the Smeysberg maxing at 17% will also test the professional cyclist legs.

And finally but not least, Limburg with Beringen on the crossroads of the two tracks. The North course through the nature reserve park, the South course tackling the hilly roads between St-Truiden and Borgloon.

The community of Bocholt gets first prize for the most heartwarming welcome for all K.O.T.K. cyclists!

While Sven took on Flanders Fields and the Flemish Ardennes over the first three days, Alex and Monique racked up their kilometers in Limburg.

On Wednesday, Bob joined Alex for his first 125km of the week, hit by a serious shower the last 12km. Meanwhile Eddy also started adding to the km ridden.

On Friday, Sven, Alex, Bob and Eddy joined forces to take on the Vlaams Brabant world championship course test. In Erps-Kwerps the gates of heaven opened up, luckily shelter was close. After 40min we could continue our course.

Saturday, Sven took on the Antwerp track, Eddy went to Ypres (starting from home…) and Alex visited local abbeys, burning some candles and praying for good weather on Sunday… boy, did it work!

Sunday was D-Day for Sven and Alex. The combined Limburg track, good for more than 250km. Weather prediction: showers…

In the morning we took on the hilly slopes through the fruit area of Limburg, Bob and Davy to take the lead and shelter Sven and Alex. Amazing track…

Back in Beringen Krist welcomed us with pancakes. Bob said his goodbyes, Geert and Steven joined for the final leg.

So far Alex’ prayers had worked and we stayed dry, in the afternoon we only had to shelter for five minutes cycling in the sun for the remaining part.

All fantastic until.. 20km from the end a big bang, Sven’s outer tyre decided to blow out! It took some craftmanship and experienced tricks from Alex and Steven to patch it up and get us over the line. Ending back at Krist who provided well-deserved local recuperative drinks.

In total our INEOS team racked up more than 4300km. Friends and colleagues sponsored the ride, which resulted in the amazing total of more than 6000Eur raised for the charity – which they have been so grateful for, as raising funds over the last two years has been really difficult for them.

All in all, an amazing week and incredible result, thanks to the whole INOES family for their support.

The whole virtual edition this year resulted in more than 1.1 million km ridden during the week, we look forward to a ‘normal’ edition next year. 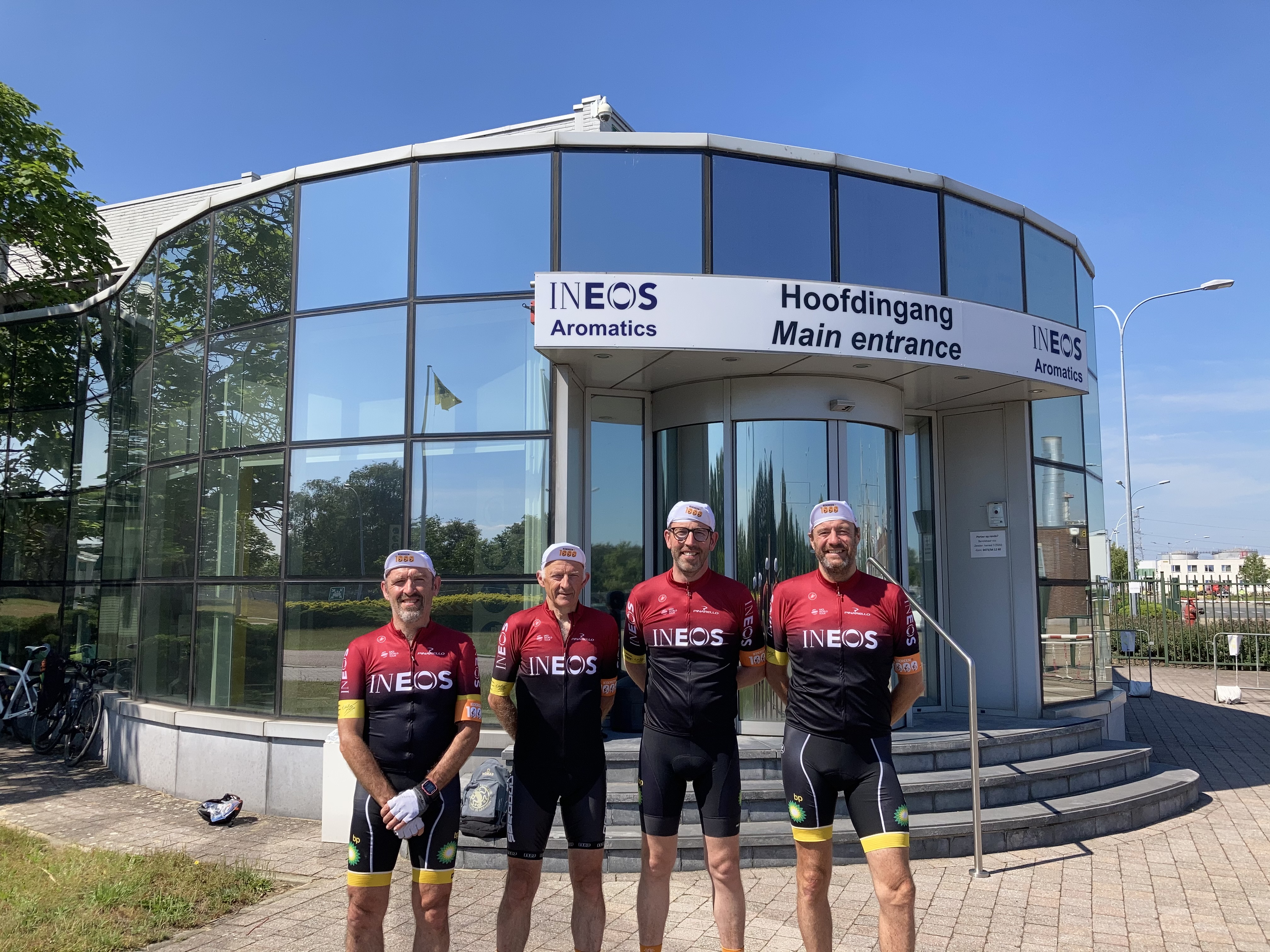