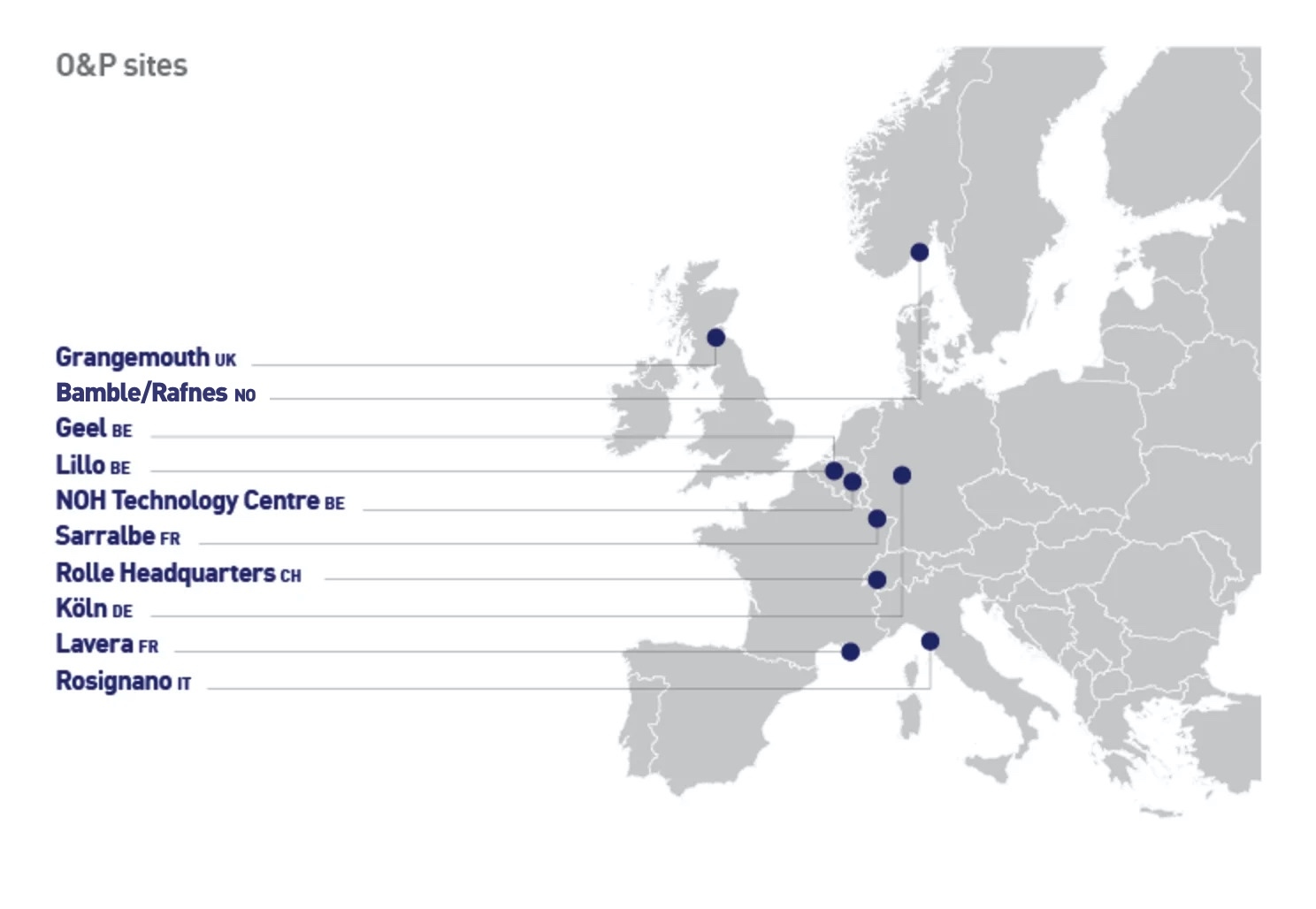 INEOS Olefins & Polymers Europe has the capacity to manufacture over 8.5 million tons of chemicals and polymers at our eight manufacturing sites. These are used to produce a wide range of derivative products, which both enable and enhance many aspects of life today.

We are Europe's largest olefin producer with four of Europe’s most highly integrated and differentiated crackers, based in France, Germany, Norway and the UK. We produce 5.5 million tonnes per annum of olefins and aromatics, and 3 million tonnes of polyolefins. From a broad technology base we are able to produce polymers which are specifically tailored to provide high value solutions to customers in our chosen market sectors. 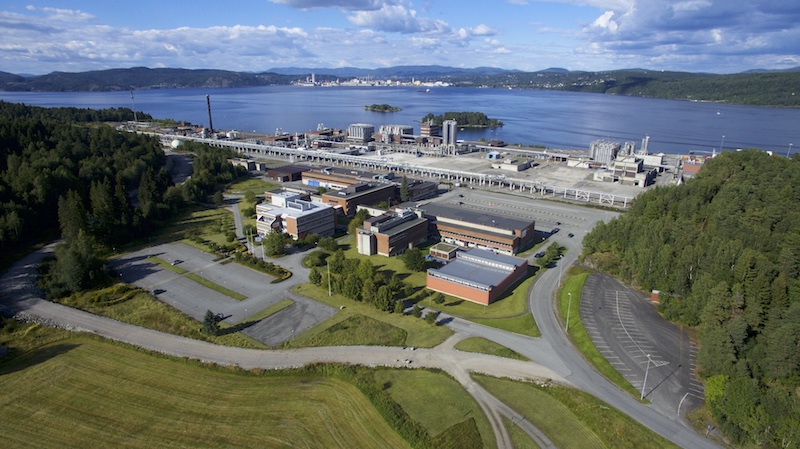 The site is situated along the southern coast of Norway, approximately 170km south of Oslo. It is home to the INEOS Rafnes cracker, principally producing ethylene which is integrated to the Bamble LDPE asset which specialises in pharma, coating, film, moulding and wire and cable applications. INOVYN also operates in the area and the INEOS/INOVYN site of Rafnes is located 3km away. The sites boast exceptional SHE results for both personnel and the environment. 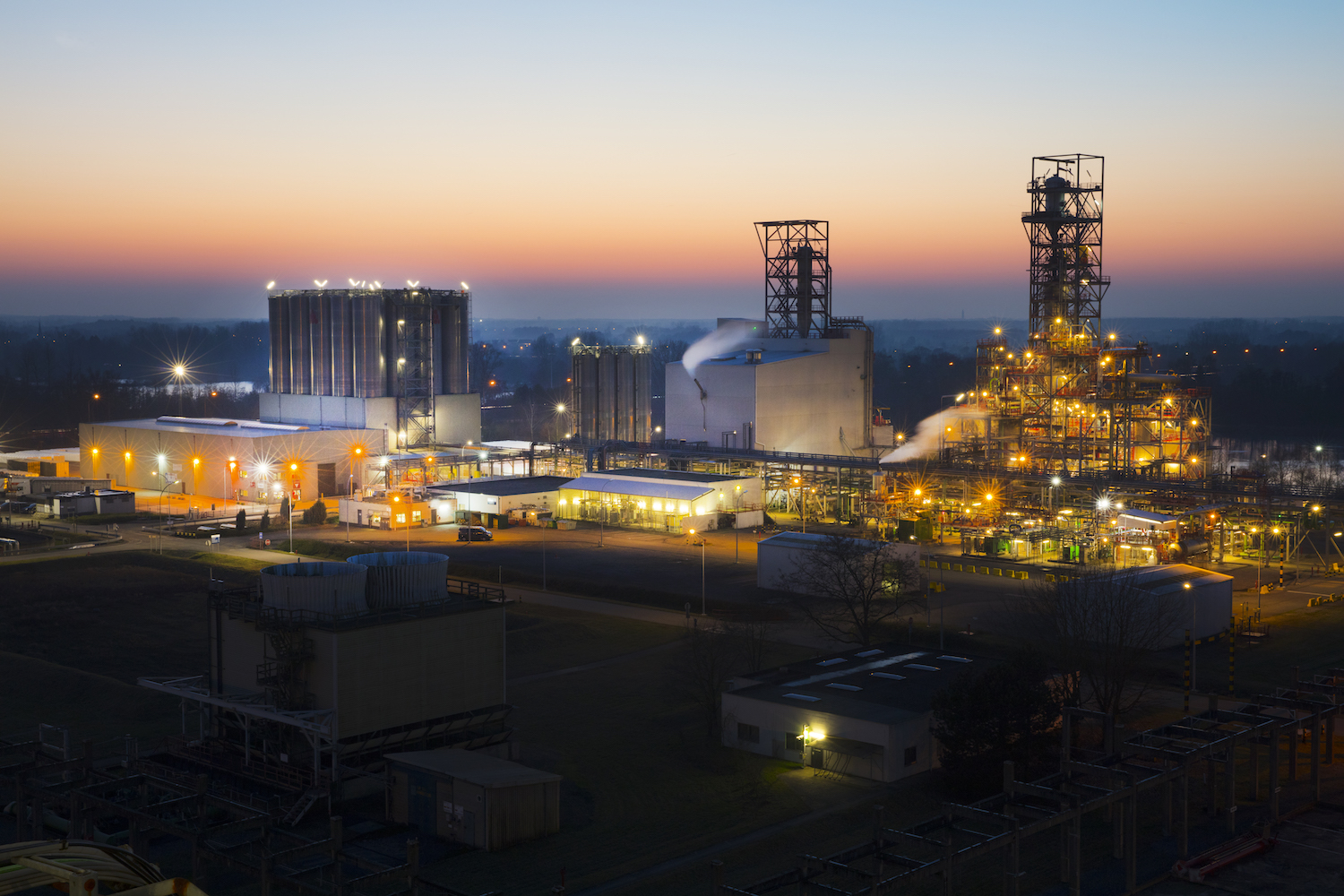 INEOS O&P Europe’s Geel facility is located 45km away from Antwerp with just over 100 employees. Polypropylene (PP) is manufactured at the site for uses including food packaging, pipe and injection moulding applications. The standard PP range of Homopolymers plus an array of complex Random and Impact Copolymer is produced. INEOS strives to maintain the highest facility standards, complying with some of the world’s strictest water, air and noise emission requirements. 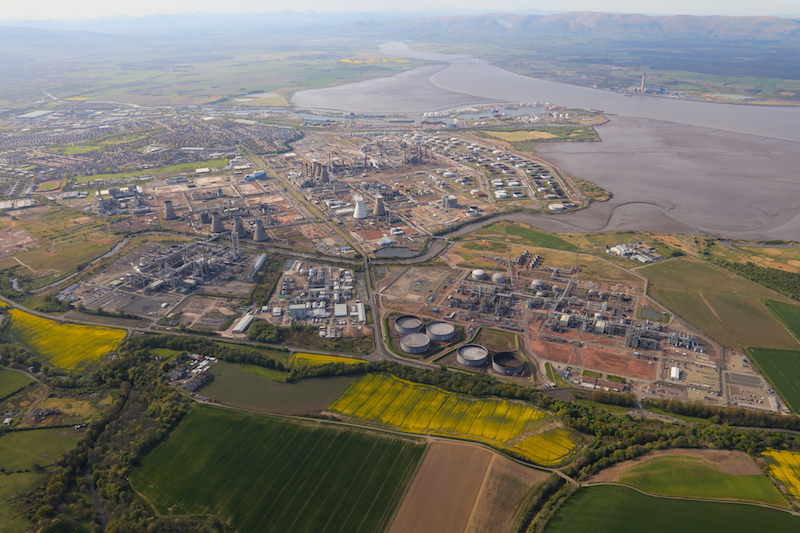 INEOS’ Grangemouth facility is a fully integrated refining and petrochemical complex, comprising three businesses: INEOS O&P UK, INEOS FPS and Petroineos (a refinery Joint Venture). Located 40km west of Edinburgh on a 1700 acre site, it is strategically placed to make use of crude oil and natural gas liquids delivered directly from North Sea fields via the Forties Pipeline system (acquired by INEOS in 2017). At the heart of the O&P UK business is the ethylene cracker, KG. The cracker produces feedstock for the two co-located polymer plants, Innovene 4 (polyethylene) and PP3 (polypropylene); as well as for the synthetic ethanol plant. Ethylene not consumed on site is also exported via a network of underground pipelines to the North East and North West of England for conversion into a wider range of (petro)chemicals or for onward export. The O&P UK business is benefitting from significant investment totalling over £1bn. This includes infrastructure (2016) that has delivered a new additional feedstock for the ethylene cracker plant in the form of US shale gas ethane, a state of the art HQ building (2016) and a coordinated programme to regenerate the site for the future. Projects are underway (2019) to construct a new steam and power plant, an additional HQ building for the INEOS FPS business and an extension to the furnace capability at KG. INEOS in Cologne is the largest chemical company and the third largest industrial employer in Cologne. With almost 2,500 employees in four business divisions, INEOS in Cologne is one of the largest locations of the INEOS Group. INEOS in Cologne was founded in 1957 as a joint venture between BP and Bayer as EC Erdölchemie. In 2001 the plant became a wholly owned BP company. Since 16 December 2005 INEOS is the owner of INEOS in Cologne. As a petrochemical site, INEOS in Cologne is an important supplier of raw materials to various industries. Its main feedstock is naphtha, produced in refineries during the processing of crude oil, delivered to the site by barges on the Rhine River or by pipelines. At the Cologne site, this is used to produce raw materials that serve the chemical industry as basic building blocks for the manufacture of plastics, rubber and fibres. They are also used in solvents and detergents, paints, fertilisers and pesticides, as well as in cosmetics and pharmaceuticals. 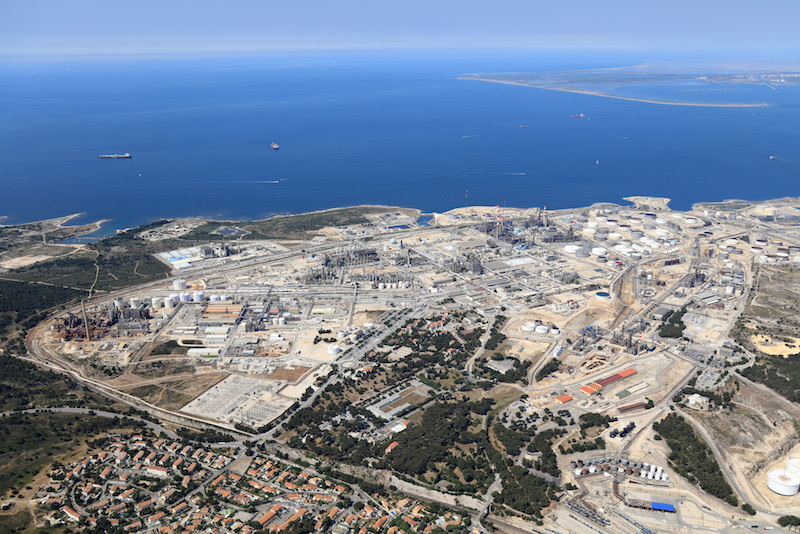 The Lavera site is located 30 miles west of Marseille, in the south of France. The site occupies 650 hectares of land on the Mediterranean coast and is one of the largest petrochemicals sites in Europe. The history of the Lavera industrial site began with the installation of the BP refinery in 1933, followed by the construction of a large petrochemical complex starting in the 1950s. In December 2005, INEOS Manufacturing France SAS, an INEOS group subsidiary, acquired all former BP group operations. In 2011, INEOS entered into a joint-venture composed of INEOS trading and refining operations and PetroChina. In 2012, this resulted in the creation of Petroineos Manufacturing France SAS, with chemical operations being taken over by INEOS Chemicals Lavera (ICL) SAS. This 650-hectare site refines crude oil and manufactures chemical products - two complementary activities, there being a high degree of synergy between them. The Lavera refinery, one of the most modern in France, has the highest annual throughput in the South East, processing 10 million tonnes of crude oil (the Lavera refinery processes 210,000 barrels of crude oil per day), and its highly-versatile prime collection of installations manufactures a wide range of oil and petroleum products for use by the general public, transport and industry. 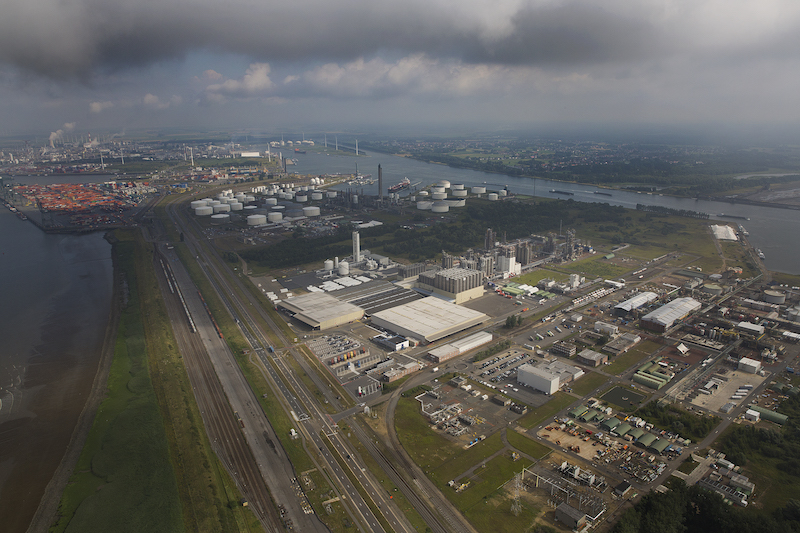 Located at the Port of Antwerp, INEOS O&P Europe’s Lillo site manufactures polyolefins. The polypropylene unit is dedicated to the production of speciality PP materials; particularly heat-seal resins for which INEOS is a world leader. The PP unit is based on unipol technology. The product mix continues to evolve into more specialised products with increased capacity. The HDPE plant in Lillo has a total capacity of 560 ktons/year on two production lines. Product applications include pressure pipe, automotive fuel tanks and blow moulding. With about 200 people on the site, INEOS O&P Europe applies the highest standards for health, safety and the environment. 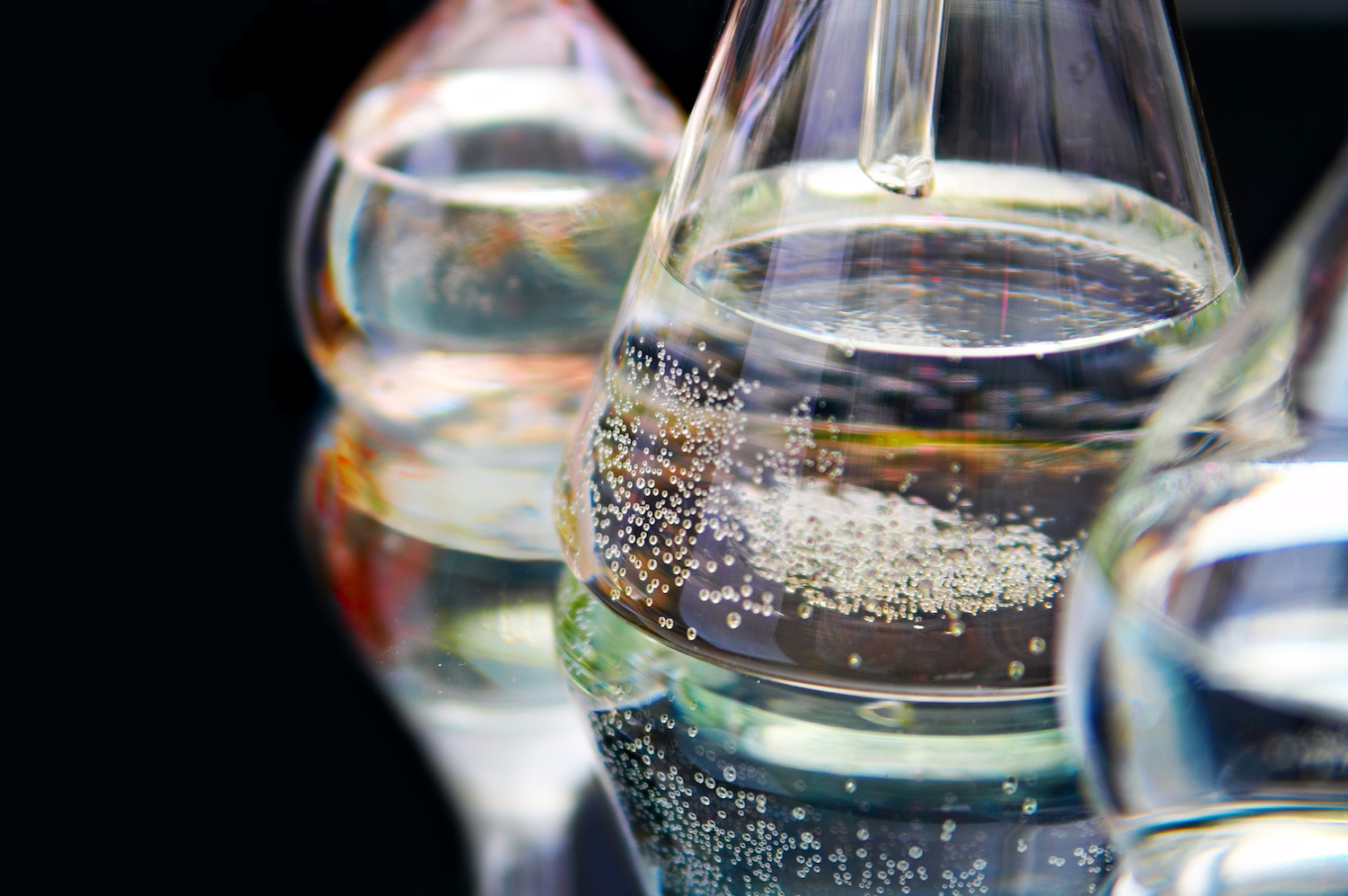 INEOS O&P Europe run a dedicated technology centre in Neder-over-Heembeek (NOH). With over 100 employees dedicated to polyolefin research, development and technical service, NOH hosts a wealth of specialised knowledge. Technologies developed here are supported by the pilot plants located in Italy (Rosignano), France (Lavera) and USA (Naperville). In addition, NOH may also provide services and solutions for analysis, processing and testing requests to any external partner. 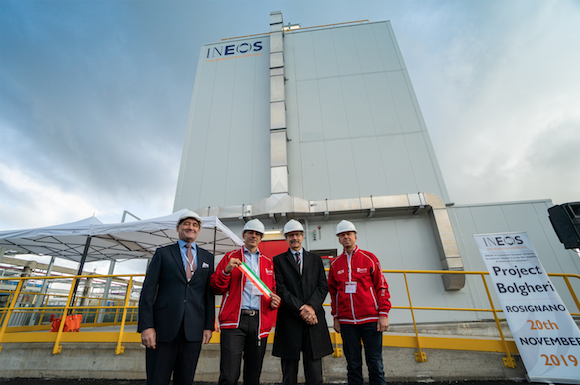 Rosignano hosts a 200kt speciality HDPE plant, pilot plants for polyethylene and polypropylene and a new pilot plant (November 2019) for advanced polymers which are partially formed from plastic waste. The HDPE manufacturing plant has a capacity of 200,000 tonnes per year with four production lines that are optimised for producing 100 percent of specialities. Rosignano strives to attain the highest standards possible attaining both ISO 9000 and ISO 14000 certificates. 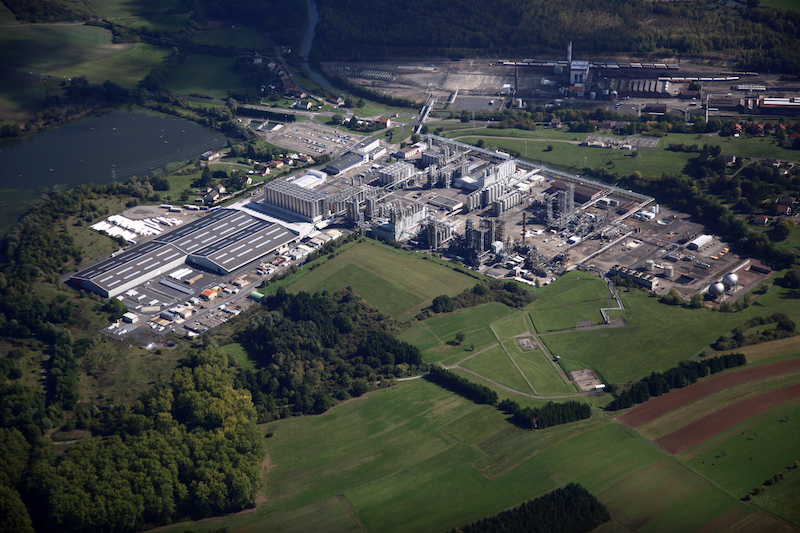 Located in the North-East of France, close to the German border, Sarralbe was initially established by Solvay over 100 years ago. It currently manufactures HDPE and PP. Applications include food packaging, pipe applications, film, extrusion and injection moulding. Health, safety and environmental performance are integral components of Sarralbe operations.