Base chemicals include ethylene, propylene, benzene and toluene, together with butadiene and butylenes, which form the basis of other products such as polyethylene and ethanol.

There are several base (or basic) chemicals that are the building blocks in the manufacture of petrochemical products: ethylene, propylene, butadiene and the so-called aromatics (benzene, toluene and xylenes).

These basic chemicals are themselves derived from the constituents of crude oil and natural gas - as shown in this table: 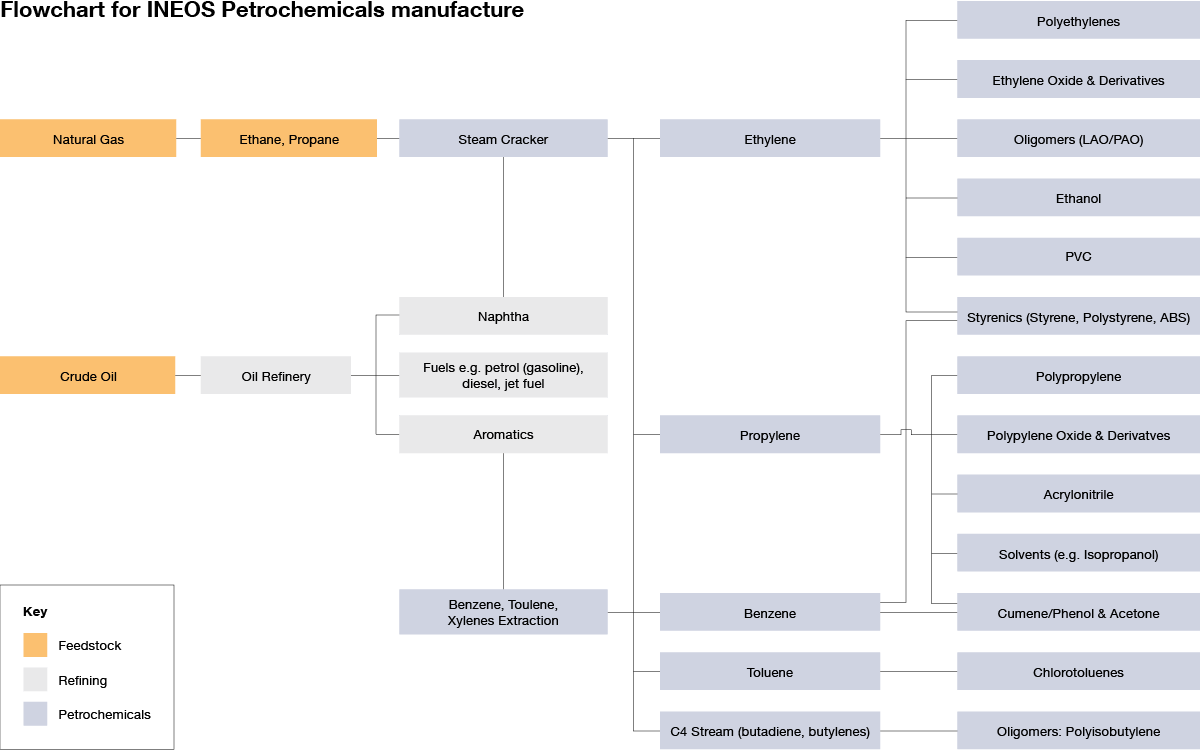 Crude oil contains a mixture of hydrocarbons (molecules containing hydrogen and carbon) of various sizes and boiling points. When crude oil is heated, various constituents boil off and can be recovered. Propane and butane appear first, followed by naphtha, which is similar to petrol (gasoline). At higher boiling points emerge kerosene/jet fuel, diesel, fuel oil (used to power large ships) and bitumen, the tarry stuff used for road surfaces. These processes take place in an oil refinery.

In a steam cracker (also called an ethylene cracker), naphtha is mixed with steam and heated up in furnaces to around 850°C for a very short period of time, typically fractions of a second, and then immediately cooled to prevent further reactions. This treatment breaks down the naphtha molecules – called “cracking” – into smaller ones such as ethylene (two carbon atoms), propylene (three carbon atoms), butadiene (four carbon atoms) and benzene (six carbon atoms in a ring). The steam helps reduce coke formation in the furnaces.

Gas is also a source of raw material for steam crackers. Natural gas is mainly methane, used for domestic heating and electricity production in power stations. Methane is also consumed to make methanol, another basic building block chemical. Slightly heavier molecules, such as ethane and propane, are present as a few per cent in natural gas. These can be separated and cracked in a steam cracker to produce ethylene and also propylene.

Besides steam cracking of naphtha and ethane/propane contained in natural gas, some building blocks are produced in oil refineries during processes to improve the quality of petrol. Examples are propylene from catalytic cracking and benzene, toluene and xylenes from catalytic reformers, a process used to increase the octane rating of petrol.

Ethylene is a flammable gas and is a primary olefin obtained through a steam cracking process.  It is the key building block used to produce a large number of higher value added chemicals, including polyethylene, polyvinyl chloride via ethylene dichloride and styrene via ethylbenzene.

Propylene is a flammable gas which is derived as a co-product either from the refinery fluid catalytic cracker process used to make gasoline or from the steam cracking process used to make ethylene.  More recently, propylene is also being produced from processes such as propane dehydrogenation and metathesis. Propylene is an important feedstock for a significant number of industrial products and is the main feedstock for polypropylene and acrylonitrile.

Benzene is mainly produced from refinery processes or as a co-product of steam cracker operations. It is used to produce a number of petrochemical intermediates, such as styrene, cumene for phenol and acetone, cyclohexane and nitrobenzene.

Toluene is a colourless, highly flammable liquid which is an olefins co-product produced during the steam cracking process.  It is used as a gasoline blending component and a chemical raw material for producing benzene. It is also used as a plasticizer, chemical intermediate and polyester intermediate.

INEOS products make a significant contribution to saving life, improving health and enhancing standards of living for people around the world.