The New Year started off on a great footing for a local charity, Kidney Kids, as kind-hearted personnel within Area 4 at the Petroineos refinery handed over a cheque for £1913 raised from their Christmas raffle. Making the donation to representatives from Kidney Kids were: Karen Fulton and John Kennedy (both Petroineos), Brian Hughes (Doosan Babcock) and Steven Penman (Balfour Beatty).  Since selecting Kidney Kids as their ‘chosen charity’ members of the Area 4 refinery team have gone 'all out' in their efforts to support the charity raising in excess of £35,000.

Sheena Dunsmore, Manager, Kidney Kids Scotland said: "Petroineos has been extremely supportive of Kidney Kids Scotland and we are delighted that the people working in Area 4 of the refinery selected us as their 'chosen charity'. Their donations along with others we receive make such a significant difference to the lives of the young people and their families that we support in the Forth Valley and across Scotland."

Kidney Kids Scotland is a locally based Charity helping families who have children with renal and urology problems all over Scotland. The Charity also supports hospitals all over the country, supplying them with much needed equipment and funding posts recognised as being essential. Much of this help is delivered in the Forth Valley Area. 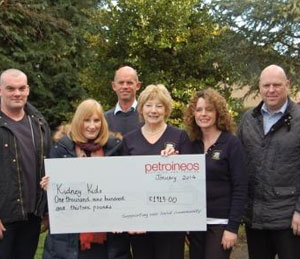