A TV crew from the BBC visited the Grangemouth site to film INEOS Director Tom Crotty ahead of him appearing on the BBC’s flagship politics show, the Daily Politics.
In the film Tom explained the need to have energy prices more in line with those paid by our competitors in other countries. Tom argued that the best solution to this issue is to speed up investment in shale gas development. He highlighted the Grangemouth Survival Plan and showcased the role shale gas plays in securing the long-time future of the site.
To bring relevance to these messages, Tom was filmed next to the KG ethylene cracker and at the shale gas tank construction site.
The Grangemouth footage will be used on the Daily Politics Show on BBC2 on Wednesday 26 February after Prime Minister Questions, where Tom will be interviewed by the well known broadcaster, Andrew Neil. http://www.bbc.co.uk/programmes/b006mjxb 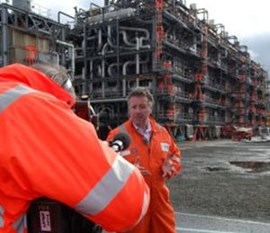