INEOS’ GO Run For Fun, a national campaign set up to inspire children to be more active through short-distance running events, has held its first ever event in Scotland at Callendar Park, Falkirk. The GO Run For Fun team in partnership with Falkirk Council and Falkirk Victoria Harriers were joined by more than 1000 young people from 36 local schools.

Since its inception more than 35,000 young people have participated in a GRFF event, including runs in Europe. Lending their support at this event was GRFF Ambassador, athlete Eilidh Child, European and Commonwealth medallist as well as INEOS Grangemouth site employee volunteers.

The GO Run For Fun series is the idea of Jim Ratcliffe, owner of INEOS, who announced a £1.5m donation spread over three years to establish a new charitable foundation to encourage children to run for fun.

Jim Ratcliffe, said: “I’m passionate about getting as many children running as possible as early as possible. We’ve held over 80 events across locations in Wales, England, Ireland and are thrilled to now kick off our first ever event in Scotland, in partnership with local running club, Falkirk Victoria Harriers.

“We’ve ambitious plans to get 100,000 children running by 2016 and the people of Scotland are going to play a key role in helping us to inspire future generations and encourage them to give running a go.”

European and Commonwealth Medallist, Eilidh Child commented: “This is a great campaign and to be part of the first ever event in Scotland is a proud moment for me.

“I am backing GO Run For Fun because I know how important it is for children to be active and to lead a healthy lifestyle. From a very young age, kids chase each other around and play tag, long before they reach the playground. This campaign just gives them another outlet to run for the pure pleasure of it. I am personally calling for parents to get their children involved now!”

“This season we hope to see even more schools and pupils taking part with our partnership with GO Run For Fun providing greater awareness of the league.

“It’s another first for Falkirk Victoria Harriers and Falkirk Council being the first Scottish event in this national campaign. We are grateful for their support which included the pupils having the opportunity to meet with a European Champion and Commonwealth Games medallist, Eilidh Child which was really exciting for them. It’s really important that pupils have fun and enjoy themselves whilst learning, and the GO Run For Fun campaign offers a perfect opportunity to do that!"

Scottish Cabinet Secretary for Commonwealth Games and Sport, Shona Robison said: “This is a welcome initiative that encourages young children, of all backgrounds and abilities, to give running a go.

“Over one thousand children took part in Scotland’s first GO Run For Fun event in Falkirk, and with more events planned this is a great example of collaboration between with local schools, running clubs, parents, volunteers and children.

“It is important that we inspire and excite young children and I am encouraged by GO Run For Fun’s aim to get over 100,000 children running by 2016.”

For more information about the GO Run For Fun programme, visit: www.gorunforfun.com 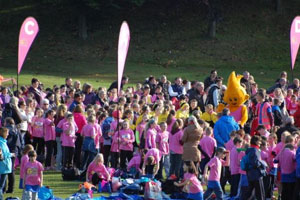