GE Water & Process Technologies has honoured INEOS O&P UK with its prestigious Ecomagination Leadership and Return on Environment (ROE) awards to recognise the manufacturer for its noteworthy reductions in water usage, and associated costs savings on its KG ethylene plant at its petrochemical complex in Grangemouth, Scotland.

Faced with a water cooling system that was limited to four cycles due to calcium scaling, the KG plant team collaborated with GE Water & Process Technologies to address this issue and thereby increase the cycles of their cooling water. The new system continuously monitors key parameters within the cooling water ensuring that the asset is now able to increase the water cycle in its cooling system from four to eight, conserving in the region of 100m gallons of water per year.

“As one of the largest manufacturers in Scotland we are constantly looking for ways to improve our environmental performance. We have made significant upgrades and investments in recent years to improve the reliability, safety and efficiency of the plant. Following the implementation of GE’s technologies, we have seen a considerable decrease in water usage,” said Kenny Stevenson, KG Plant manager. “We are delighted that GE Water & Process Technologies have recognised our efforts with these Ecomagination Leadership and ROE awards.”

Conserving water is just one of the ways in which INEOS at Grangemouth is demonstrating its commitment to an on-going improvement in its safety and environmental performance. To date the site has delivered its best ever safety record, with more than one year without a recordable injury to its employees or contractors.

INEOS is a global manufacturer of petrochemicals, specialty chemicals and oil products. It comprises 18 businesses each with a major chemical company heritage. Its production network spans 67 sites in 16 countries throughout the world. Grangemouth represents INEOS’ largest manufacturing site by volume of products. It is home to Scotland’s only crude oil refinery and produces the bulk of fuels used in Scotland.

Its Grangemouth petrochemical plant makes around 1 million tonnes per annum of product, which are used as the building blocks in the manufacturing of household items. These include synthetic ethanol, ethylene, propylene and polymers (polyethylene and polypropylene). INEOS’ products are used extensively in the petrochemical industry and transformed into bottles and pipes, cabling and insulation and food packaging and are used in the pharmaceutical industry.

The KG ethylene steam cracker at Grangemouth is a world scale manufacturing asset. It uses a combination of ethane gas from the US and North Sea to produce ethylene – a key ingredient for many petrochemical and manufacturing processes. 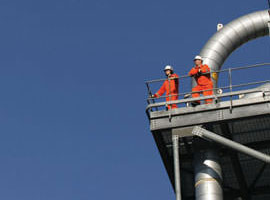