The naming ceremony at Qidong near Shanghai marks the latest landmark in INEOS’ huge $1 billion global project to bring Shale gas from the USA to Europe.

INEOS is building eight ships to transport  over 800,000 tonnes a year of ethane gas at
-90°C across the Atlantic from the USA to Norway and Scotland.

This project will help revolutionize the European chemicals industry by reducing both its feedstock costs and energy costs.

Jim Ratcliffe says, “Today is a landmark day for both INEOS and Europe. We have seen how US shale gas revolutionized US manufacturing and we believe these huge ships will help do the same for Europe. INEOS together with Evergas has commissioned eight brand new ships, accessed hundreds of miles of new pipeline and built two enormous terminals to get US Shale gas to Europe. The scale of the whole project is truly breathtaking.”

INEOS today held a naming ceremony at Qidong near Shanghai in China to name the world’s first two state of the art bulk ethane carriers built to carry ethane gas from the USA to Europe.

Jean-Jacque de Dardel, the Swiss ambassador, says, “Sixty five years ago Switzerland and China began an extraordinary partnership. Today, our two countries continue to set impressive milestones. This project is a fine example of Swiss and Chinese companies coming together to produce ground-breaking engineering, delivering the most modern and environmentally sustainable gas carriers ever built.”

Jim Ratcliffe, INEOS founder and chairman, adds, “the scale of the project is extraordinary. We’re going to move more than 40,000 barrels of gas a day, every day of the year, for fifteen years, from the US to Europe. Any way you look at it, this is an extraordinary achievement. This gas will keep our businesses competitive for years to come and guarantee jobs and investment. I am incredibly proud of what has been achieved here.” 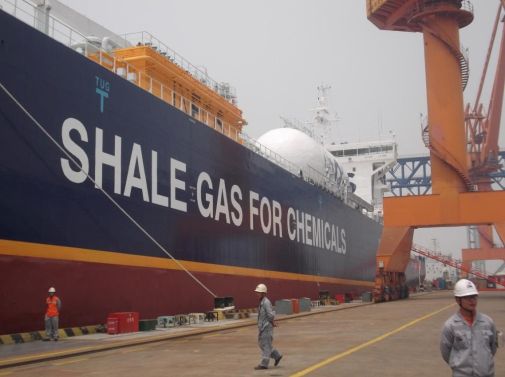