Today INEOS Petrochemicals UK confirmed that it has selected the location for the new shale gas (Ethane) tank it plans to build at the Grangemouth site.

The Ethane tank and new terminal will allow INEOS to import shale gas from the USA to supplement declining North Sea feed stocks essential for the Grangemouth site. Once both the tank and terminal are completed Grangemouth will have the capacity to be the first chemical plant in the UK to receive US shale gases.

Calum MacLean, Chairman INEOS Petrochemicals UK:  says, After what has been a very difficult three months at Grangemouth it is very reassuring for our employees to see real progress being made on the tank and infrastructure project. £150 million will be committed to the import terminal project that should be completed in 2016. The next three years will remain challenging for the Grangemouth site but with a clear focus and support of its shareholders the site can look forward to a bright future.

The decision comes as part of a survival plan that was announced to staff in October.  The survival plan was launched as North Sea feed stocks continue to fall and high site operating costs continue to climb, making the site totally uncompetitive.  The site has lost approx. £150 million per year over the last 3 years.

As part of the survival plan INEOS Capital has agreed to invest a further £300 million in the site to build the new terminal and ethane tank, source alternative feed stocks and support site loses until the additional feed stocks arrive.  As part of this survival plan INEOS set up a consultation process with staff to reduce fixed costs, and submitted applications to the Scottish Government for a grant of £9 million and a loan guarantee of £125 million.

INEOS is close to completing a tank and terminal at its Rafnes plant in Norway which will mean it will be the first place in Europe to import shale gases from the US and receive the competitive advantage of ‘shale economics’.

According to Calum MacLean, INEOS Petrochemicals UK, As we can see from our plant at Rafnes in Norway the ability to bring US ‘shale economics’ to Europe is fast becoming a reality.  By applying the same approach we can make Grangemouth a great Scottish success story. 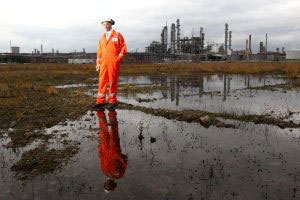 INEOS at Grangemouth backs bid for Forth Green Freeport