The second manufacturing unit at Grangemouth’s KG ethylene plant is brought back to life eight years after being mothballed.

INEOS completes successful operational trials as it prepares to receive shale gas ethane from the USA.

“We are now in great shape to receive shale gas from the US and to finally run the Grangemouth plant at full rate,” says Gordon Milne, INEOS Grangemouth Operations Director. “When US shale gas finally arrives here in the autumn, this plant will move into the premier league of European petrochemical plants. Bringing the site back into profitability is the best way to secure our future here in Scotland.”

INEOS has confirmed that it has completed successful operational trials on the second manufacturing unit (Train 2) of its enormous gas cracker at Grangemouth, eight years after being mothballed.

Train 2 has undergone rigorous recommissioning trials to prepare for the arrival of US shale gas ethane. The first deliveries of US shale gas are expected to arrive by ship at Grangemouth in the autumn.

In 2008 the KG ethylene cracker was unable to operate at full capacity and INEOS was left with no option but to close the second manufacturing unit.

The US ethane will be used as a supplementary feed for the KG ethylene plant at a time when North Sea supplies are dwindling and will allow the plant to run at increased rates.

According to Gordon Milne, INEOS Grangemouth Operations Director, “We are one of the few businesses in Scotland investing and growing our business on such a scale as this. With the successful completion of the Train 2 trial we are now in great shape to receive shale gas from the US and to finally run the Grangemouth plant at full rates.”

“All the parts of the jigsaw are finally coming together and Grangemouth will soon be back in the premier league of European petrochemical plants. INEOS is one of very few companies with the imagination and skill to vision and deliver a project of this size and complexity.”

The INEOS investment brings US shale gas economics to Europe. The project includes contracts to acquire gas from the Marcellus Shale in Western Pennsylvania; connection to the new 300 mile Mariner East Pipeline to bring the gas to the Marcus Hook deep water terminal near Philadelphia; the design and commissioning of eight Dragon class ships that will create a virtual pipeline across the Atlantic; and the construction of a new import terminal including the biggest shale gas storage tank in Europe at Grangemouth.

John McNally, CEO INEOS Grangemouth says, “Bringing the site back into profitability is the best way to secure our future here in Scotland. We know that ethane from US shale gas has transformed US manufacturing and we are now a step closer to seeing this advantage being brought to here to Grangemouth.”

The new import terminal at Grangemouth will also benefit the Fife Ethylene Plant facility in Mossmorran, Scotland after it was announced that the owners of the plant had agreed a long-term sale and purchase agreement to secure ethane from mid 2017. Access to this new source of feedstock will help complement supplies from North Sea natural gas fields. The agreement will also ensure the competitiveness of an additional major manufacturing facility in Scotland and help secure skilled jobs in the long run. 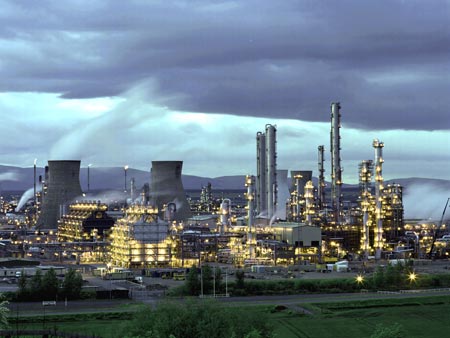