Three site employees have received the accolade of being chosen to participate in the carrying of the Queen's Baton as it travels through our local community on its final leg of a relay that has taken in 70 countries, travelled more than 190,000km in 288 days.

Now in the UK, around 4000 'batonbearers' will carry the baton towards the opening ceremony of the 2014 Commonwealth Games in Glasgow on 23 July.

Derek Callahan, I/E Engineer carried the Queen's Baton during the relay leg at the iconic Falkirk Wheel. Derek was nominated to carry the Baton via various sources, including the Commonwealth Games Council, Falkirk School of Gymnastics and also family members, for his service to sport in Gymnastics. 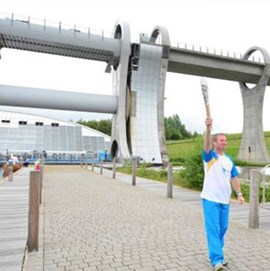 Derek Callahan, with the Queen's Baton at the iconic Falkirk Wheel