In 2016, in memory of George, who worked at the INEOS Grangemouth site for almost 40 years, his family donated an award in his name to be presented on an annual basis to a third year Modern Apprentice.

Continuing the recognition of previous holders, local lad, Calum was presented with his award at the INEOS HQ in Grangemouth on 24 June 2021.

Stuart Collings, CEO INEOS O&P UK, said, “Each year we are impressed by the calibre of the candidates for the George Hall Award. It reflects the hard work and dedication invested by all our apprentices, their supervisors and assessors and the quality of teaching at Forth Valley College. It is therefore entirely fitting that in memory of a valued employee, we are presenting this award this year to Calum.”

The award was made in the presence of George’s widow, Jane and son, Chris.

Jane Hall said, “George would have been so proud of all of the candidates for their hard work and commitment to doing their very best. During his career at Grangemouth, George was renowned for his unstinting support of the Modern Apprenticeship Scheme, recognising it as a first class training programme. In speaking with Calum’s supervisor, I have learned that in the short time that he has been working with INEOS, Calum has already demonstrated similar traits to those that George exhibited during his time on site. I would like to thank INEOS for continuing to make this annual award in George’s name. I am sure that George would have been pleased that the quality of INEOS’ Modern Apprenticeship Scheme is continuing to be upheld and that Calum is a very worthy recipient of this award in his name.”

Calum McKay, Process Modern Apprentice, commented, “I have been fortunate to work with many experienced and knowledgeable people, all of whom have been as eager to teach me as I have been to learn from them. I look forward to each shift knowing that I have the opportunity to develop my understanding and implement, consolidate and build upon the foundations established during my time at Forth Valley College. I would like to thank everyone for their support in helping me to achieve this award and in my on-going development towards qualifying as a Technician at INEOS Grangemouth.”

Calum is one of 27 Modern Apprentices currently in training with INEOS O&P UK at its Grangemouth site.

George Hall, pipelines specialist, started work at Grangemouth in 1975 as an apprentice electrician and over the course of forty years held several different roles across the site. 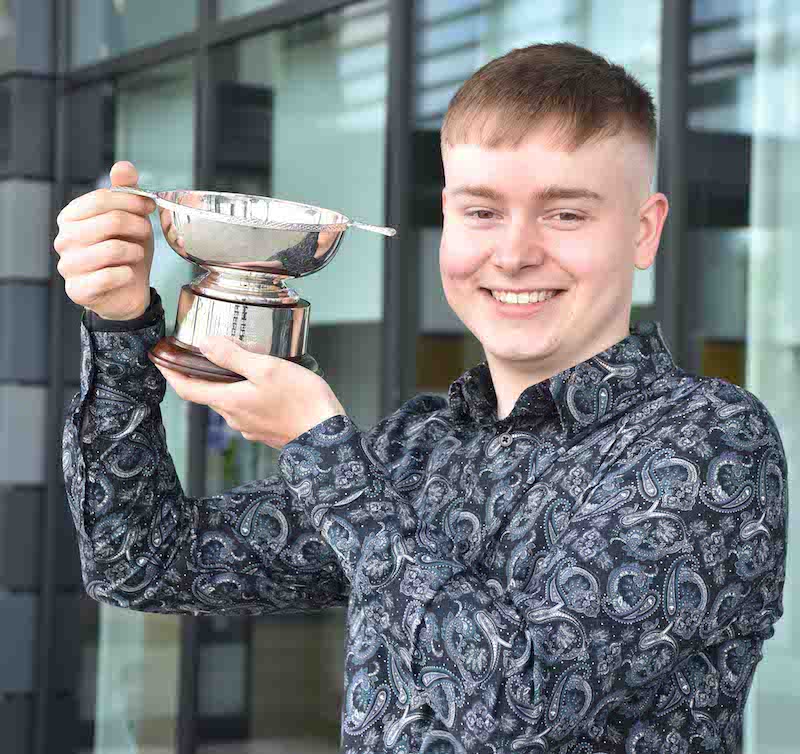